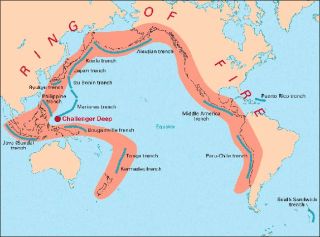 Indonesia is a dangerous country to call home.

Precariously located above the grinding and mashing of several tectonic plates, and ringed by a chain of fire-breathing volcanoes, the country's islands are located in one of the most volatile regions in the world. The eruption of a volcano and the shaking of a tsunami-generating earthquake this week is just one reminder of Indonesia's fiery foundation.

As the world's largest archipelago — spread across 17,500 islands — Indonesia sits between the world's most active seismic region — the notorious Pacific Ring of Fire — and the world's second most active region — the Alpide belt. Being sandwiched between such seismicity has meant the islands experience some of the strongest earthquakes and most powerful volcanic eruptions known on Earth. [Related: Why Do Some Earthquakes Cause Tsunamis But Others Don't?]

The Pacific Ring of Fire, technically called the Circum-Pacific belt, is the world's greatest earthquake belt, according to the U.S. Geological Survey (USGS), due to its series of fault lines stretching 25,000 miles (40,000 kilometers) from Chile in the Western Hemisphere through Japan and Southeast Asia.

Indonesia feels the worst of both worlds, lying between the Pacific Ring of Fire along the northeast, and the Alpide belt along the south and west from Sumatra down to Timor.

In 2009 alone, Indonesia had 10 earthquakes greater than a magnitude-6.0, according to the USGS.

Monday's 7.7-magnitude earthquake that triggered a 10-foot (3-meter) tsunami, killing at least 113 people, occurred when the Australia and Sunda plates butted heads. Called thrust faulting, one rocky plate subducted or took a dive below the other, resulting in an earthquake.

Other large ruptures along the Sunda megathrust include the 9.1-magnitude 2004 quake and Indian Ocean tsunami that killed approximately 230,000 people in a dozen countries. A look beneath Indonesia would reveal lots of shifting and colliding plates. Below the country, the Eurasian Plate, Australian Plate, Indian Plate, Sunda Plate and Pacific Plate mash together.

In fact, the plate movements are also responsible for some of the most active volcanoes. For instance, the Indian Plate is subducting beneath the Eurasian continental plate, which has formed the volcanic arc in western Indonesia, home to 129 active volcanoes in Indonesia that are a part of the Ring of Fire.

The Pacific Ring of Fire is home to 452 volcanoes in total — that's 75 percent of the world's active and dormant volcanoes.

Both of Indonesia's most active volcanoes – Kelut and Mount Merapi (meaning "mountain of fire") – sit on Java Island.

And both have a history of explosive eruptions. Mount Merapi erupted today (Oct. 26), with preliminary reports of 100 people killed, according to the USGS. Merapi is located in central Java, roughly 310 miles (500 kilometers) southeast of the capital Jakarta.

Other colossal volcanic eruptions that have occurred in Indonesia include the eruption of Krakatau, which reportedly generated the loudest sound ever heard in modern history when it exploded in 1883, killing 40,000 people. Krakatau is a volcanic island located between the islands of Java and Sumatra.

The Toba supervolcano located on the island of Sumatra, which erupted 70,000 years ago, was a global catastrophe, creating six years of volcanic winter.