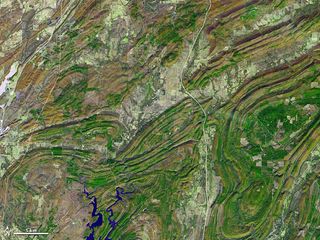 The highly eroded remnants of a mountain chain that may have once stretched from Texas into southeastern Canada.
(Image: © Jesse Allen and Robert Simmon)

Oklahoma is known for its miles of flat prairie, but the state also has a very old, eroded mountain range, called the Ouachita Mountains, which formed over 300 million years ago.

These mountains are highly eroded remnants of a much larger range, one that may have once stretched from Texas into southeastern Canada.

On Nov. 13, 2002, NASA's Terra satellite captured this image of the eroded mountain remnants. This picture combines infrared, red and green wavelengths of light, to create an image that is basically true to color. The mountains form various patterns with their long, folding contours. Low-lying areas between the slopes are home to bodies of water, crops, towns and roads.

The mountains have a geologic history spanning hundreds of millions of years. Long before the first dinosaur evolved, the southern central United States sat at the bottom of an ancient sea. Starting around 340 million years ago, the supercontinent of Pangaea was formed, and resulting tectonic collisions thrust the ancient sea floor skyward to form a massive mountain range. The similarities between rock layers of the Ouachita Mountains and the Appalachian Mountains indicate that they were part of the mountain range formed by this collision.

About 200 million years ago, Pangaea began to break apart. The breakup wrenched apart the supersized mountain range, leaving a wide swath of low-lying land between the Ouachita Mountains in the west and the Appalachian Mountains in the east. Low-profile land persists today across much of the southeastern United States.