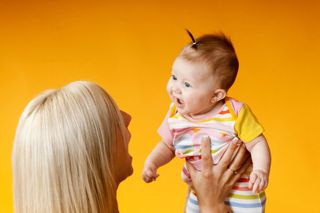 The image of the typical American mom has transformed significantly since Mother's Day celebrations first started a century ago. From today's declining fertility rates to the increasing money people spend on moms, here's a look at motherhood by the numbers.

Pew says these numbers reflect two dovetailing trends: Education levels of all women are on the rise, while births among less-educated women have been on the decline, especially since the recession took hold. From 2008 to 2011, the number of new moms without a high-school diploma fell a staggering 17 percent. [5 Ways Motherhood Has Changed Over Time]

Among women ages 16 to 50 who gave birth in the past 12 months, 62.1 percent were in the labor force, according to the U.S. Census Bureau. Meanwhile, there were 5 million stay-at-home moms in the United States in 2012. Among the families of married couples, 24 percent with children under 15 had a stay-at-home mom, up from 21 percent in 2000.

An estimated 4.1 million women between the ages of 15 and 50 gave birth in the past year. Among them, 36 percent were unmarried, including those who were divorced, widowed and never married. In 2011, 407,873 recent moms were living with a cohabiting partner.

Teen pregnancy rates have been dropping, women are waiting longer to have kids, and there's an increasing share of American women who never have biological children.

As for what new moms are calling their babies, 2012's most popular names in the United States were just released this past week. Sophia and Jacob still reign, but today's parents value increasingly value a unique name. Forty percent of baby boys in the 1880s received one of the 10 most common names in the United States, according to research published in 2010. These days just 10 percent get a top-10 name.

Meanwhile, 81 percent of women had kids by age 40 to 44 in 2010, down from 90 percent in 1976. More educated women reaching the end of their childbearing years are more likely to be childless than others, but childlessness has grown most among the least educated women, according to Pew.

From humble tribute to multibillion-dollar industry

Those projections are good news for the Census Bureau's estimated 16,182 florist shops, 103 greeting-card publishers, 14,654 beauty supply stores, and 23,739 jewelry retailers in the country. But the national observance and now-lucrative industry has quite humble origins.

A woman named Anna Jarvis held the first Mother's Day commemoration in 1907 in tribute to her own deceased mother, who organized so-called Mothers' Day Work Clubs in West Virginia during the Civil War. Those clubs treated both Union and Confederate soldiers and helped improve health and sanitary conditions for communities affected by the war.

Thanks to Jarvis' lobbying and the growing popularity of her annual celebrations over the next several years, President Woodrow Wilson designated the second Sunday in May as Mother's Day in 1914.

But Jarvis eventually turned on the holiday, horrified by its burgeoning commercialism. She even campaigned to get rid of it altogether and when she died in 1948, her obituary quoted her as saying: "A printed card means nothing except that you are too lazy to write to the woman who has done more for you than anyone in the world. And candy! You take a box to Mother — and then eat most of it yourself. A pretty sentiment."

There is another account of Jarvis ordering a "Mother's Day Salad" at the tea room at Wanamaker's store only to dump it on the floor and leave. Were she alive today, Jarvis might be horrified to know Hooters is offering free food for moms this year.