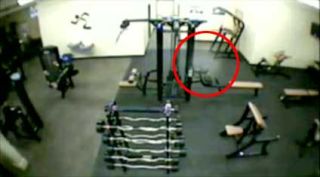 Casper? Is that you? A still frame from the Anytime Fitness video showing an apparent ghost (the white splotch inside the red circle).
(Image: © YouTube)

It's Halloween season, and you know what that means: ghosts! A recent surveillance video depicting what many believe to be a ghost made international news.

The video was taken at Anytime Fitness, an all-night fitness club in Overland Park, Kansas. When owner Kim Peterson came in one morning and reviewed the previous night's security footage, she was surprised and mystified by what she saw: a glowing, fuzzy light apparently in a workout area, meandering around the weight benches and fitness machines.

The image appeared at 2:21 in the morning, about half an hour after the last person left the building. It reappeared about nine times over the next two hours, each time briefly moving across the room.

It seemed a real mystery.

Various people offered their theories, ranging from a hoax to a bug to headlights from a passing car. Peterson and her security company dismissed all those obvious explanations, and by far the most popular is that a ghost visited the gym for a early-morning workout. One woman at the club, Sharon Bohm, suggested it could be a spirit; Peterson's son was even more specific, suggesting it was his deceased grandfather, looking after his mother's new business. Gym members were asked to come up with a name for their resident ghost, and the case remains unsolved — until now.

Before entertaining ghostly explanations, it's best to use scientific methodologies and critical thinking. A closer look at the image reveals some interesting clues about the ghost's identity.

Clue No. 1: The object is whitish and out of focus. Security cameras (especially the round "fish-eye" lenses used in the club) are designed to be mounted high above the ground and record activity twenty or more feet away. Things at that distance will be in focus, while objects close to the lens will be out of focus. Therefore the object was very close to the camera.

Clue No. 2: The object appears to be glowing, but there's no indication that it is in fact emitting light. It has all the characteristics of something that is instead reflecting white light, perhaps from one of the bright lights mounted around the camera (you can see them clearly in video footage of the story).

Clue No. 3: Though Peterson and news reporters claimed that that ghostly object "spent the night wandering around the weights," a closer look at the video shows that it instead wandered over or across them. Its movements do not show any interaction with the objects in the room at all, suggesting it was not in the room but instead above it.

Clue No. 4: Despite the fact that the gym had at least eight different cameras on and functioning that night, the "ghost" was seen on only one of them. If the spirited image had actually been in the room, other cameras should have recorded the same image from other angles. They didn't, therefore the object and phenomenon, whatever it is, only happened to that one camera.

One obvious answer, prematurely dismissed by Peterson and others, is almost certainly the correct one: the ghost is a bug. A spider or insect wandered onto the camera; that's why it was out of focus, why it seemed to glow, why it didn't interact with anything in the room, and why it only appeared on one camera. It's true that a moving light wouldn't activate the camera, as they are sensitive to motion, not light. But it was the bug's movement that triggered the sensor and started the recording.

While it is possible that the Anytime Fitness camera actually captured a ghost, in science the explanation that fits the facts with the fewest assumptions is the best. A bug on the camera fits all the facts and solves the mystery. And it's not the first time that a spider on a security camera created a ghostly image; in June 2007, a courthouse in Santa Fe, New Mexico, captured a nearly identical ghost that turned out to be a bug.

An exterminator—not an exorcist—could rid the gym of its ghost, but what's the fun in that? If they are still looking to name the mysterious image, how about Boris the Spider?

Benjamin Radford is managing editor of the Skeptical Inquirer science magazine. He has investigated mysterious phenomena and ghosts for over a decade. He solved the Santa Fe Courthouse Ghost case and recently investigated a haunted theater in Albuquerque, New Mexico. His books, films, and other projects can be found on his website