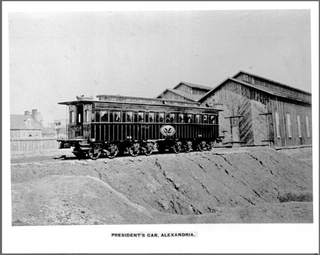 Before President Abraham Lincoln was laid to rest, a train carried his body on a two-week funeral procession across the Northern U.S. states in 1865. Mourners from New York to Illinois gathered to see the train and pay their final respects, but despite drawing millions of spectators, one detail of the much-publicized event was thought to have been lost to history: The color of the president's railcar.

Now, in a case of historical sleuthing, Wayne Wesolowski, a chemist at the University of Arizona in Tucson, has put together the missing piece of the puzzle.

By analyzing tiny paint chips from one of only a few surviving artifacts from the train, Wesolowski discovered that the true color of the historic railcar was a brownish-red color that he describes as "dark maroon."

"It's magnificent to know what the real color was," Wesolowski told LiveScience. "It was such a huge, important event, and we knew a lot of the technical details about the railcar, but the color had been a mystery." [Busted: 6 Civil War Myths]

But solving the mystery was an exercise in patience.

Before moving to Arizona, Wesolowski held a teaching post at Benedictine University near Chicago for 10 years. While there, he directed the Lincoln Train Project, which aimed to collect historical information and create a traveling museum exhibit about the storied funeral procession. As part of the project, Wesolowski completed a scale model of the funeral train, measuring 15 feet (4.6 meters), in 1995.

Nearly 20 years later, Wesolowski was contacted by organizers of a Chicago-based project called the 2015 Lincoln Funeral Train. The organization is building a full-size replica of Lincoln's funeral car, and they intend to use it to retrace the path of the procession as part of the 150th anniversary celebrations in 2015.

The project organizers wanted to know what color to paint the replica.

Wesolowski pored through source materials and historical records, looking for hints about the color of the president's railcar. Since there were no color photographs, lithographs or contemporary paintings of the train, Wesolowski had to rely on newspaper articles and other written accounts, most of which were contradictory.

"I didn't find color records in the newspapers, and a lot of the other descriptions were written long after the Civil War," Wesolowski explained. "Some described the car as being a rich chocolate brown, and others said it was more like claret, or red wine. But it's very hard to describe colors with words, and paint names today have very different meanings."

For instance, chocolate bars did not exist in 1865, so "chocolate brown" referred more to Dutch chocolate, which, because of the way it was prepared, was a darker, redder brown than we imagine today, Wesolowski explained.

Out of the woodwork

Through his research, however, Wesolowski came into contact with a man from Minnesota who had inherited a piece of the railcar's window frame. The sample is perhaps the only artifact of exterior wood to have survived the fire, Wesolowski said.

To determine the color of the railcar, Wesolowski analyzed a small piece of the window trim under high-powered microscopes in the university's chemistry lab. The researchers then went to the art department and carefully scraped away microscopic flakes of paint and tried to match them with pigment records and national color standards on file.

"We enlarged these color samples so much that you can see the dots that your eyes blend together to make up the color," Wesolowski said. "We put the paint chips on top of these samples, and if you can see the chips, the colors don't match. If they do match, the chips disappear because they just blend in."

Finally discovering the true dark maroon color of the railcar was a triumph for Wesolowski, but in some ways, it's a bittersweet victory.

"In one way, it's magnificent, but in another way, now I know that the model I made is a little too much on the red side," Wesolowski said with a laugh.