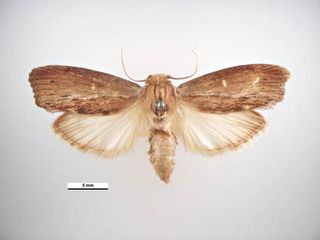 The ubiquitous greater wax moth is ordinary in every way but one: It has the ability to hear the highest-known sound frequency.

The greater wax moth's hearing goes up to about 300 kilohertz, nearly 100 kHz higher than the hearing of some bats.

"This is the animal with the highest frequency sensitivity yet recorded, there's no other animal that can hear such a high frequency," said study co-author James Windmill, a bioacoustician at the University of Strathclyde in Scotland.

The moth's ultrasonic hearing range, which was described Tuesday (May 7) in the journal Biology Letters, could help the creature hear the sonar communication of their predators, bats, Windmill said. [Flying Mammals: Gallery of Amazing Bats]

The nondescript brown moth species, Galleria mellonella, lives in North America, Europe and Asia and has a 1.1 inch (3 centimeter) wingspan. Its tiny ear is just 0.02 inches (0.5 millimeters) across.

Other researchers had tested the hearing of the greater wax moth, but gave up at about 100 kHz. But the moth's ear was so sensitive at that frequency that Windmill and his colleagues wondered just how high they could hear. (By comparison, the human ear can hear sounds up to just 20 kHz)

The research team used a laser vibrometer to measure the vibrations of the ear in response to sound waves. They also measured electrical signals in the ear nerve.

They then watched the ear as they raised the sound frequency higher and higher.

The researchers found that the moth's hearing went to an astonishing 300 kHtz.

The team hypothesizes that the moth's ultrasonic hearing could help it evade their predators in many environments.

Bat echolocation calls can go as high as 212 kHz, so the high-frequency hearing could help the greater wax moth hear a different predator species' calls and evade them, Windmill said.

The other possibility is that their ears help females hear the mating calls of males.

Though male mating calls are at a lower pitch (about 80 kHz), they are incredibly short pulses. Because of how hearing works, an ear tuned to the lower pitch of the mating calls would still be moving in response to one pulse when the second was made. Being tuned to a higher frequency range could allow the females to differentiate the individual pulses, Windmill said.