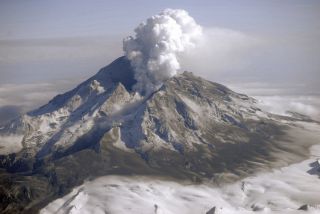 Before Alaska's Redoubt volcano erupted with an incredible series of explosions in March 2009, the mountain kept residents on edge for months.

The volcano first signaled its unrest in fall 2008 with tremors that hinted at magma moving deep underground. By January 2009, an uptick in tremors, earthquakes and gas emissions from Redoubt volcano led the U.S. Geological Survey's Alaska Volcano Observatory to raise its threat level to orange, stating an eruption was imminent. (The highest threat is red.) But to the confusion of some Alaskans, the volcano observatory, following national criteria for alerts, lowered and raised Redoubt's threat level between yellow and orange several times before hitting red on eruption day, March 22.

"It was clearly a somewhat confusing sequence," said Diana Roman, a volcano seismologist at the Carnegie Institution for Science in Washington, D.C. Now, Roman and her colleagues hope to improve the eruption prediction toolkit with another technique, which uses earthquakes to detect changes in Earth's crust caused by magma moving underground.

As magma pushes upward, it breaks rock, creating tiny earthquakes. The magma's ascent also changes the forces pushing on Earth's crust, which scientists can detect by analyzing earthquakes. (Along with magma-induced earthquakes, Roman also examined regional earthquakes, those triggered on nearby faults, to scan the region surrounding Redoubt before the volcano was active enough to produce its own earthquakes.)

The earthquake activity indicates magma beneath Redoubt rose very slowly, over several months. Then, 48 hours before the night of the March 22 cataclysm, the molten rock suddenly pressurized, either ascending rapidly or bulking up as gas bubbles escaped, Roman said. "The magma was sneaking up very quietly until the last minute, then started to pressurize and generate a signal," she told OurAmazingPlanet.

While it helps to have hindsight to understand the physical processes before and during the eruption, Roman added that real-time monitoring of changes in stress in Earth's crust could be a valuable source of information about what's going on beneath a volcano. [The World's Five Most Active Volcanoes]

"I hope it will become adopted as a standard approach to analyzing and interpreting volcanic seismic data," she said.

The earthquake activity, combined with other monitoring, may have helped volcano watchers better predict Redoubt's coming eruption, without the early warnings that led to flip-flopping between yellow and orange, the researchers said.

Ash from Redoubt, located 106 miles (170 kilometers) southwest of Anchorage in the Aleutian Islands, forced temporary closures of the city's international airport in 2009.The volcano had last erupted in December 1989, causing engine failure in a 747 jet, which landed safely.