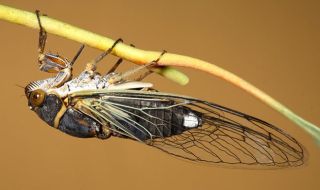 Cicadas get a little help from nature when it comes to grooming themselves, a new study finds.

As unwanted particles, such as pollen, build up on a cicada's wing, water droplets can wipe it clean and then "jump" off the flying insect, effectively removing residue from its delicate features.

Researchers from Duke University in Durham, N.C., and James Cook University in Australia used a special high-speed video-imaging system to observe how water flies off a cicada's wing, and how this helps keep it dirt-free. Their findings were published online today (April 29) in the journal Proceedings of the National Academy of Sciences. [Ewwww! 6 Crazy Facts About Cicadas]

"Most cicadas are unable to clean their own wings because of their short appendages," study co-author Gregory Watson, a researcher at James Cook University in Australia, said in a statement. "Furthermore, these insects commonly live in areas where there is little rain over an extended period of time. However, the areas are humid, which provides the tiny dew droplets needed to 'jump clean' their wings."

The researchers noted that droplets of water can merge together and use their stored surface energy to jump off water-repellent — or so-called superhydrophobic — surfaces.

"The ability of water-repellent surfaces to self-clean has conventionally been attributed to rain droplets picking up dirt particles," study leader Chuan-Hua Chen, an assistant professor of mechanical engineering and materials science at Duke University's Pratt School of Engineering, said in a statement. "For this conventional wisdom to work, rainfall must be present, and the orientation has to be favorable for gravity to effectively remove the rain droplets. These limits severely restrict the practical use of self-cleaning superhydrophobic surfaces."

But the researchers found that cicada wings are cleaned in much the same way, and the entire process can be achieved with droplets of dew, as well — not just raindrops.

"[T]he self-propelled jumping motion of the dew drops is very effective in dislodging contaminating particles, regardless of the orientation," Chen said.

Cicadas live underground for the majority of their lives. The most common species emerge on a yearly basis, but some species only come out every 17 years, according to the researchers.

Rows of tiny bumps line the wings of cicadas, and as drops of water land on them, they touch only the tips, producing pockets of air underneath the individual droplets. As they travel across the surface of the wings, the water droplets seemingly float on the air bubbles, the researchers explained.

The findings of the new study could one day help scientists and engineers design materials that are able to successfully clean themselves, Chen added.

"Self-cleaning surfaces using the jumping-drop mechanism can work at any orientation, which is a huge advantage for applications with unfavorable orientations with respect to gravity, such as mobile electronics and building roofs," he said.

Editor's Note: This story has been updated with a correct image of a cicada.