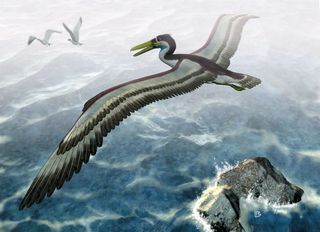 Scientists have found a new huge and well-preserved fossil of a goose and duck relative that swam around what is now England 50 million years ago flashing sharp, toothy smiles.

The skull, discovered on the Isle of Sheppey off the southeast coast of England in the Thames Estuary, belonged to a huge ancient bird in the extinct genus Dasornis, which had a whopping 16-foot (5-meter) wingspan.

"Imagine a bird like an ocean-going goose almost the size of a small plane!" said Gerald Mayr of the Senckenberg Research Institute in Germany and a member of the team that studied the skull. "By today's standards, these were pretty bizarre animals, but perhaps the strangest thing about them is that they had sharp, tooth-like projections along the cutting edges of the beak."

Scientists had found fossils of other bony-toothed birds, or pelagornithids, in deposits called the London Clay, which underlies much of London, Essex and northern Kent in the southeast of England. This new fossil, from the same clay layer, is one of the most well-preserved fossils ever found there and has provided scientists with previously unknown details of the birds' anatomy. Mayr's study of the fossil is detailed in the Sept. 26 issue of the journal Palaeontology.

Like all living birds, Dasornis had a beak made of keratin, the same substance that forms our hair and fingernails. But unlike modern birds, whose ancestors lost their teeth through evolutionary processes, Dasornis had bony "pseudo-teeth" (true teeth are made of enamel and dentine).

Mayr said that the ancestors of modern birds likely lost their teeth to save weight and make flying easier, but that bony-toothed birds such as Dasornis re-evolved them for dietary reasons.

"These birds probably skimmed across the surface of the sea, snapping up fish and squid on the wing," he explained. "With only an ordinary beak, these would have been difficult to keep hold of, and the pseudo-teeth evolved to prevent meals slipping away."

Researchers think that the closest living relatives to Dasornis are not other big birds such as the albatross, but ducks and geese.