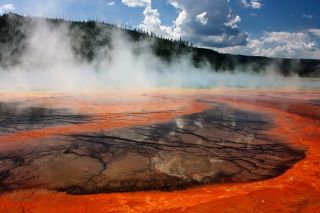 Experiments with plain old corn syrup have revealed that giant jets of magmarising up from near the Earth's core might explain supervolcanic activity seen at Yellowstone.

Mantle plumes, as these jets are called, are thought to be titanic pillars of hot molten rock that penetrate overlying material like a blowtorch. As the tectonic plates that make up Earth's surface drift over the plumes, lines of volcanoes are born. Most volcanoes are found near the edges of tectonic plates that are violently either pushing or pulling at each other, but mantle plumes were thought up as a way to explain the existence of volcanic chains such as the Hawaiian Islands, which lie far away from the borders of tectonic plates.

But decades after mantle plumes were first proposed, "there is a very heated debate in the geosciences — sorry for the pun — about whether mantle plumes actually exist," said study author Christopher Kincaid, a geophysical fluid dynamicistat the University of Rhode Island. [50 Amazing Facts About Earth]

The findings of Kincaid and his team, detailed online April 7 in the journal Nature Geoscience,could help resolve this controversy over whether mantle plumes actually exist. In particular, the study looked at the proposed mantle plume under Yellowstone.

"Yellowstone is one key area where arguments against plumes are focused," Kincaid said.

A supervolcano lies underneath Yellowstone National Park, a volcanocapable of eruptions dwarfing anything ever recorded by humanity. Geologists have suggested this supervolcanism is driven by a mantle plume currently under Yellowstone. As the Earth's surface has drifted over the plume, it has influenced many areas over time, including the Pacific Northwest.

However, critics of the mantle plume idea argue there is no single plume that can account for certain geologic oddities in the Pacific Northwest, Kincaid said. These oddities include an unusually large gap there between gigantic deposits of volcanic rock known as flood basalts, which normally are linked with a mantle plume's head, and the volcanic chain known as the Snake River Plain, which is linked with the tail of the trail the Yellowstone plume is thought to have left on the surface.

Another major discrepancy involves the Snake River Plain and another volcanic chain, the High Lava Plains, Kincaid added. These both approximately line up east to west, but the rocks of the High Lava Plains get older from west to east, while the Snake River Plain gets older from east to west. If they were caused by the same mantle plume, one might expect them both to get older in the same way.

While mantle plumes were first thought up to help explain volcanism away from tectonic plate borders, there is no reason they cannot also come up near the edges of plates, including areas known as subduction zones, where one plate is diving under another. To see how mantle plumes might interact with the subduction zones under the Pacific Northwest, Kincaid and his colleagues relied on a tank of sugar water.

"We use what might be described as a one-of-a-kind lab method for simulating mantle processes in all subduction zones," Kincaid told OurAmazingPlanet.

First, the corn syrup has very little inertia: "If you apply a stress to it, it flows, but as soon as you remove the stress, it stops immediately," Kincaid said. "This is like the mantle."

Finally, the syrup is nontoxic. "There are a lot of viscous fluids that could be used, but can be hard to work with and to dispose of," Kincaid said. "Corn syrup is safe and easy to work with. My students always joke they are going to have pancakes after a good set of experiments."

The researchers simulated a mantle plume by heating up a patch of the tank's floor, which sent up a jet of syrup.

"We often get large crowds gathered in the lab when we are running these things," Kincaid said. "The room is dark and the plumes are illuminated with micro tracers that sparkle and glow in the light sheets we shine through the tank. It is like you are looking directly into the Earth's insides."

The team mimicked a subducting plate by sticking a rigid fiberglass sheet into the top of the syrup.

The researchers found the subduction zone under the Pacific Northwest could stall, deform and partially tear the Yellowstone mantle plume in two. [Infographic: The Geology of Yellowstone]

"Most plume arguments only consider a simple view of a plume, rising into an otherwise stagnant system," Kincaid said. "We found that plumes near subduction zones are like a prairie dog sticking its head up from its hole during a tornado."

Their experiments reveal a split mantle plume could replicate the main geological oddities seen in the Pacific Northwest.

"The fun of science is finding an unexpected result," Kincaid said. "We were shocked at how experiment after experiment gave us the same pattern seen in our own backyard."

These findings suggest Earth has "an amazing safety feature," Kincaid added. "Just as the atmosphere lets in light and protects from harmful solar energy, a plate tectonic oddity unique to our planet called rollback subduction seems to effectively stall plumes, trapping much of this magma-forming energy deep in the system."

In contrast, "Venus has no record of Earth-like plate tectonics," Kincaid said. As such, mantle plumes there have been free to rise to its surface, pumping massive amounts of heat and greenhouse gases into the atmosphere, helping explain the hellish conditions there today.

The fact the subduction zone is essentially severing the Yellowstone mantle plume hints "that Yellowstone will wither on the very long term, something on the scale of a million years," Kincaid said.

However, this does not mean the dangers the Yellowstone supervolcano might pose are over. "The deep magma plumbing system is still there, and still needs to be understood," Kincaid said.

This lab system could help investigate other tectonic areas on Earth.

"One area where there is also debate about the existence of a mantle plume near a subduction zone is the Tonga system in the southwest Pacific," Kincaid said.