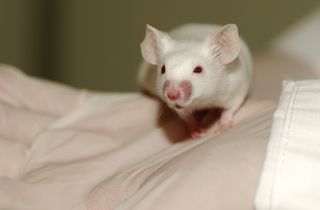 When Hurricane Sandy hit New York City on Oct. 29, 2012, New York University neuroscientist Gordon Fishell was far from his lab in Manhattan, stranded at home in Westchester, N.Y., because public transportation was closed.

By that evening, weather reports showed Sandy tracking right over the NYU School of Medicine, home to Fishell's 3,000-mouse colony that he and his colleagues used to study how neurons communicate. But it wasn't until the next day that Fishell learned that the worst had happened: When Sandy flooded the laboratory's basement, all of the mice had drowned.

"I felt an awful sense of despair," Fishell wrote of the experience in an article released in the April 25 issue of the journal Nature. Not only did he mourn the mice's suffering, he wrote, he grieved for the 20 years of work it had taken to build the colony, and for the setbacks his students and postdoctoral researchers would now have to face. [Jersey Shore: Before & After Hurricane Sandy]

Fishell's experience was not unique. On Oct. 31, 2012, the NYU Langone Medical Center released a statement confirming what news agencies had already begun to report: That Sandy had wiped out thousands of lab mice and rats. Power failures from the storm also put sensitive biological research materials at risk.

Mice may seem a dime a dozen, but scientists work for years to breed and genetically engineer the perfect animals for their particular research projects. Fishell's mice, for example, carried 80 different traits that he was researching. In essence, the mice were custom-built, impossible to pick up from any old lab supply company.

Mice are used in labs because they breed and mature quickly, but even so, genetically engineering them takes time. Transgenic mice, or mice whose genes have been "turned off" or altered, can take a year to develop when altering just one gene, University of Florida, Gainesville researcher Ashley Seifert told LiveScience in October. When the genetic alterations are more complex, it can take two or three years to establish a transgenic breeding population. And that's before research on the trait even begins.

Animal research disasters have happened before Sandy. In 2001, Tropical Storm Allison flooded Houston — and the laboratories of researchers at the Texas Medical Center research campus. Some 5,000 lab animals died.

Michael Blackburn, a scientist at the University of Texas Graduate School of Biomedical Sciences, lost all of his mice in the flood. At first, he despaired for his lung-disease research program. But he was able to take advantage of science's collaborative features and get new mice from other labs. The research team also diversified the way they studied lung disease, using computer models, cell cultures and human studies.

"It slowed us down, no doubt, but I think in the end it was a success story," Blackburn told LiveScience in November.

Fishell is recovering, too. After a mourning period of 12 hours, he started planning. His lab members used the downtime during the storm recovery period to write papers and analyze data from past experiments. Fortunately, Fishell had previously shared his transgenic mice with other researchers around the country, many of whom were now clamoring to return the favor by sending those mice's descendents back.

"I received more than 150 emails offering help in the first week," Fishell wrote. "Six months later, I've regained about 35 percent of what I lost."

Because some of the mice have been crossbred in the interim, Fishell does have to start from scratch on some lines. He will be lucky to rebuild the colony within two years, he wrote.

NYU is rebuilding animal spaces in a less flood-prone third-floor location, where Fishell's colony will eventually reside. In the meantime, he and his team are making emergency plans using the lessons learned from Sandy.

"I like to think that the hurricane has also helped my students in some ways, even though it has been frustrating and heartbreaking, and has set back or ended important projects." Fishnell wrote. "There were many times when the students needed to act before getting my approval, simply because we couldn't communicate, and they ultimately made the right decisions. The experience taught them how to be free agents; they are more responsible now for their science."