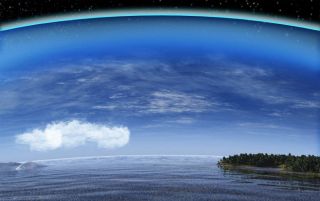 Dana Nuccitelli is an environmental scientist at a private environmental consulting firm in the Sacramento, Calif., area and a contributor to Skeptical Science. He contributed this article to LiveScience’s Expert Voices: Op-Ed & Insights.

Global warming hasn't paused, it's accelerating, especially in the oceans, according to a new study published online in the journal Geophysical Research Letters (GRL). In fact,  only about 2 percent of global warming from the increased greenhouse effect is used in heating the air, while about 90 percent heats the world’s oceans, according to the Intergovernmental Panel on Climate Change.

In the GRL paper, Magdalena Balmaseda and Erland Källén of the European Centre for Medium Range Weather Forecasts and Kevin Trenberth of the National Center for Atmospheric Research matched ocean-heat-content measurements with sea-level, surface temperatures and other types of data.  The researchers incorporated that data into climate model simulations to re-create past ocean temperature changes.

While some previous studies have included ocean temperature data, until recently the measurements of the deep oceans below 700 meters were relatively sparse. By including other types of measurements into their model, this study was able to create a more detailed picture of past ocean heat changes.

The scientists found that over the past decade, while surface air temperatures have not risen very much, there has been a warming of the deep oceans that is unprecedented over the past 50 years.  They also found acceleration in the overall warming of the Earth.  Consistent with previous research, they concluded, “In the last decade, about 30 percent of the warming has occurred below 700  meters, contributing significantly to an acceleration of the warming trend.” [Surprising Depth to Global Warming's Effects]

The authors suggest that more heat is being transferred to the deep ocean layers, due to changes in wind patterns associated with an ocean cycle called the Pacific Decadal Oscillation.  However, as Kevin Trenberth explained, this process is only temporary.  Sooner or later the warming at the surface will accelerate once again, he said, adding, "…it contributes to the overall warming of the deep ocean that has to occur for the system to equilibrate. It speeds that process up. It means less short-term warming at the surface, but at the expense of a greater, earlier, long-term warming, and faster sea-level rise."

This short-term pause in warming at the Earth’s surface is also consistent with climate model simulations.  Research reported in 2011 by Gerald Meehl and his colleagues in Nature Climate Change found that decade-long periods of little or no surface-air warming are relatively common in climate-model simulations.  During these so-called "hiatus decades," more heat is transferred to the deep oceans, consistent with the findings of the Balmaseda team.

When the ocean cycles change state again, these models tell us that we can expect to see a rapid warming of temperatures at the surface.  Another study published just this month in the journal Nature Climate Change has concluded that accelerated ocean warming can explain the slowed surface-air warming in recent years.  Lead author Virginie Guemas noted, "If it is only related to natural variability then the rate of warming will increase soon."

Contrary to claims that global warming has paused, the overall warming of the Earth has accelerated over the past decade. While we have experienced a respite in warming at the surface, it is a temporary one which will eventually be replaced by a rapid warming of surface air temperatures.

The views expressed are those of the author and do not necessarily reflect the views of the publisher.  This article was originally published on LiveScience.com.