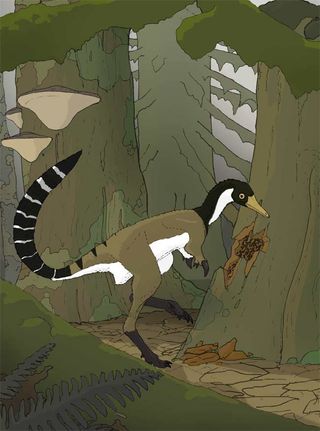 Besides ripping into trees for termites, this dinosaur likely ran through the forests on its two slender legs.
(Image: © Nick Longrich.)

Even in the dinosaur world, the small and dainty existed, in the form of a mini-dino that likely didn't terrorize any creatures other than termites.

The newly described dinosaur, called Albertonykus borealis, was about the size of a chicken and is now considered the smallest dinosaur to have existed in North America.

"These are bizarre animals. They have long and slender legs, stumpy arms with huge claws and tweezer-like jaws," said researcher Nick Longrich, a paleontologist at the University of Calgary in Canada.

The dinosaur belongs to the Alvarezsauridae family, which includes Alvarezsaurus calvoi, a bird-like dinosaur that likely snagged insects for food, and Mononykus olecranus, another lightweight that was equipped with a pair of stubby claws whose function is not known for sure.

Like its relatives, A. borealis had long slender hindlegs, which probably made the dinosaur an agile runner. Stout front legs and hands that each sported a massive claw would have easily torn into logs to snag termites.

"Proportionately, the forelimbs are shorter than in a Tyrannosaurus but they are powerfully built, so they seem to have served a purpose," Longrich said. "They are built for digging but too short to burrow, so we think they may have been used to rip open logs in search of insects."

In fact, the researchers also found evidence for termite borings in fossilized wood discovered in the same area where the mini-dino fossils showed up, also supporting the idea that this dinosaur was a termite eater.

The 70 million-year-old bones of A. borealis were discovered at Dry Island Buffalo Jump Provincial Park in Alberta in 2002 by a team led by Philip Currie of the University of Alberta. The bones were stored at the Royal Tyrrell Museum in Alberta. It wasn't until recently that Longrich came upon them.

"You can really find amazing things if you just keep looking at fossils we already have sitting in museum collections," Longrich said. "The number of dinosaur discoveries is actually accelerating because we just keep digging up more material to work with."

The research, detailed in the August issue of the journal Cretaceous Research, was supported by the National Science Foundation, an Alberta Ingenuity Graduate Studentship, the University of Calgary and the Natural Sciences and Engineering Research Council.