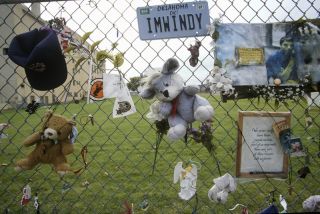 After Monday's bombing at the Boston Marathon, many people casting around for an explanation have focused on the date: April 15, a holiday in Massachusetts and the middle of a month with a history of violence.

It's not yet known whether the perpetrator or perpetrators of the bombing, which killed three, chose April 15 for its associations with tax day or with Massachusetts' Patriots' Day, a commemoration of the first battles of the Revolutionary War. The month could simply be a coincidence, given that the Boston Marathon, always held on the third Monday of April, was a convenient target.

Nevertheless, some have speculated about the symbolism. On NBC, reporter Tom Llamas told Matt Lauer that "over the last 20 years in this country several terrorist attacks and school shootings have taken place around this time of the year." He cited the Virginia Tech shooting, which took place April 16, 2007; the Columbine school shooting, which occurred April 20, 1999, and the Oklahoma City bombing, which took place on April 19, 1995. [History of Human Aggression: 10 Ways Combat Has Evolved]

It's true that some dates in April have special significance to right-wing extremist fringes — and these dates can feed on one another. Timothy McVeigh chose to carry out the Oklahoma City bombing on April 19 because it was the anniversary of the end of the 1993 Waco siege. That siege occurred when Bureau of Alcohol, Tobacco and Firearms officials attempted to execute a search warrant on a compound of Branch Davidians in Texas. The siege lasted 50 days and ended with a deadly fire that killed 76 on April 19.

Eric Harris and Dylan Klebold, the Columbine shooters, left journals behind indicating they were inspired by McVeigh (bombs the pair set to go off in the school's cafeteria and kitchen failed to explode). The pair may have initially planned to carry out the massacre on April 19, only to be delayed a day. There is also speculation that Harris and Klebold chose April 20 deliberately, because it is Adolf Hitler's birthday.

There is no evidence that Seung-Hui Cho, the perpetrator of the Virginia Tech mass shooting, planned the date symbolically. In his suicide manifesto, Cho did mention "martyrs like Eric and Dylan," indicating that he felt a link to the Columbine killers.

While April does have a history, it's hardly a statistical outlier. The National Counterterrorim Center, which tracks both international and domestic terrorism, reveals a worldwide history of attacks on almost every day of the year.

In the United States, terrorist attacks or attempted attacks occur year-round as well. Eric Robert Rudolph bombed Centennial Olympic Park in Atlanta in July 1996. An Austin man angry over federal taxes flew a small airplane into the IRS building in Austin, Texas, in February 2010, killing himself and one other person. "Shoe bomber" Richard Reid attempted to bring down an American Airlines flight in December 2001. "Underwear bomber" Umar Farouk Abdulmutallab made his attempt to bring down an airplane on Christmas day in 2009. And the worst terrorist attacks on U.S. soil took place, of course, on September 11.

Mass shootings, which are not typically classified as terrorism, are similarly scattered. Columbine and Virginia Tech may have happened in April, but the shooting in Tucson, Ariz., that wounded then-congresswoman Gabrielle Giffords occurred in January. The Newtown school shooting in Connecticut was a mid-December disaster.

A list of mass shootings since 1980 compiled by Mother Jones magazine reveals that six occurred in April, comparable to other months: eight in December, five in November, four in July, and six in March, to name a few examples.