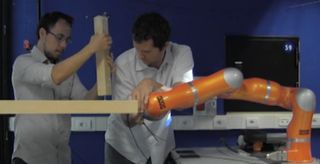 For those who are tired of assembling IKEA furniture, researchers have created a new robot to help with the task.

The robot uses a force sensor and a vision-tracking system to learn how a user wants it to move. Then the robot essentially becomes an extra pair of hands — moving freely when the user tugs on a table top, flipping the tabletop over, and then becoming stiff as a person screws in the legs, Gizmodo reported.

A robot learning to collaborate with a user to assemble an IKEA table from Sylvain Calinon on Vimeo.

Unfortunately, the robot can't do everything. It doesn't know which pieces go where, meaning there could still be some head-scratching involved in assembling the Expedit shelf.