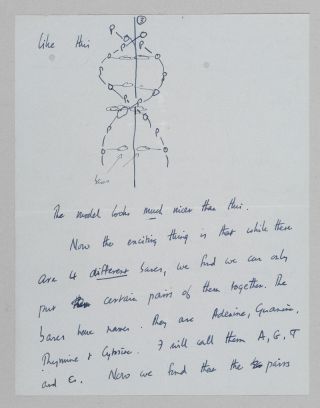 The third page of the letter contains a diagram Crick drew of the double helix structure of the DNA molecule.
(Image: © Christie’s)

A bidder paid over $6 million at an auction today (April 10) for a letter British scientist Francis Crick wrote to his 12-year-old son explaining the double-helix structure of the DNA molecule, which he and James Watson had just discovered.

The winning bid was $5.3 million, with the final price tag for the "Secret of Life" letter coming in at $6,059,750, according to Christie's, which handled the sale.

The seven-page handwritten note, dated March 19, 1953, contains diagrams that outline the scientists' model for how "des-oxy-ribose-nucleic-acid (read it carefully)" replicates and encodes instructions for the development and function of living things.

"In other words we think we have found the basic copying mechanism by which life comes from life," Crick wrote to his son, Michael, who was at boarding school at the time, signing off, "lots of love, Daddy." [See Images of Crick's 'Secret of Life' Letter]

As legend has it, when Watson and Crick made their discovery on Feb. 28, 1953, Crick announced inside a local Cambridge pub called the Eagle, "We have discovered the secret of life." Their findings wouldn't be published in the journal Nature until two months later, and the note to Michael is likely one of the first written explanations of the discovery.

"As far as we know this is the first public description of these ideas that have become the keystone of molecular biology and which have spawned a whole new industry and generations of follow on discovery," Michael Crick wrote in Christie's catalogue.

The auction was handled by Christie's, which had valued the letter at $1-2 million dollars, comparing it to a letter Albert Einstein wrote to President Franklin D. Roosevelt warning about the potential of nuclear weapons. Christie's sold that letter in 2002 for just over $2 million.

According to Christie's, Crick's family plans to give half of the proceeds from the sale of the DNA letter to the Salk Institute in California, where the scientist, who died in 2004, studied consciousness later in his career.

Those three items were among the Crick-related mementos on sale this week in New York. Tomorrow (April 11), Heritage Auctions will sell the Nobel medal, struck in 23-carat gold, that Crick received for the discovery in 1962, alongside Watson and Maurice Wilkins.

Heritage Auctions has valued the medal and accompanying diploma at $500,000. As of Wednesday afternoon, the standing bid on the items was $280,000. Thursday's sale will also include Crick's award check with his endorsement on the back, the scientist's lab coat, his gardening logs, nautical journals and books.