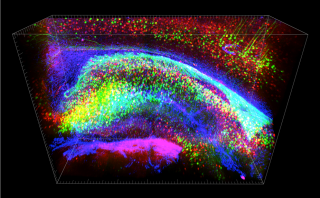 CLARITY allows molecular analysis of the intact brain. Each color represents a different molecular label; this labeling can happen after the brain is clarified but still fully intact. Hippocampus is shown, a structure important for many important roles including learning, memory, and emotion.
(Image: © Kwanghun Chung and Karl Deisseroth, Howard Hughes Medical Institute/Stanford University)

For the first time, scientists have developed a way to make organs transparent to light while keeping them intact, providing a detailed glimpse of their inner structure.

"Studying intact systems with this sort of molecular resolution and global scope — to be able to see the fine detail and the big picture at the same time — has been a major unmet goal in biology, and a goal that CLARITY begins to address," study leader Karl Deisseroth, a bioengineer and psychiatrist at Stanford University, said in a statement. [Video - See Transparent Mouse Brain]

Traditionally, imaging organs like the brain has involved slicing them into thin sections, which destroys long-distance connections between cells. Methods for imaging whole, intact organs exist, but are generally not compatible with methods for studying genes and other things at the molecular level. The new technique lets scientists study intact organs at different scales, from the broad to the very detailed.

The method works by removing the fatty tissue that surrounds cells and makes them opaque, while preserving the tissue's structure. First, the tissue is soaked in a mixture of chemicals and heated slightly to form a mesh that holds everything in place except the fatty parts. The fatty parts are removed from the tissue by applying an electrical voltage that pulls them out.

This leaves the tissue intact and virtually transparent — clear enough to read text through. Molecular markers can then be added to color specific parts of the see-through organ.

Deisseroth and his team used the CLARITY technique to image the brain of an adult mouse. The technique allowed them to view far-reaching neuronal connections and local circuitry, as well as details on the cellular and molecular level.

The scientists then labeled the tissue with molecular markers to show how well underlying structures were preserved. What's more, the tissue could be washed and relabeled multiple times. While most of the work was done in a mouse, scientists also used the technique to image zebrafish brains and postmortem human brains.

Physicist Winfried Denk of the Max-Planck Institute for Medical Research, in Germany, called the new technique "a big step forward in the light microscopy of the whole brain," adding that "it appears to resolve many of the issues that plagued the other methods used for this purpose."

The researchers say the imaging technique will enable a deeper understanding of the brain's function in health and disease. The technique's main limitations are in the microscope optics, not the transparent tissue itself, they say.

Deisseroth is one of 15 experts in the team that is mapping out goals for the $100 million project to map activity in the human brain announced April 2 by President Barack Obama.