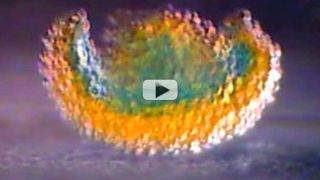 A team of chemists has found a way to print 3D material that resembles living tissue.

The scientists developed a 3D printer that squeezes out tiny water droplets into a drop of oil, creating miniature spheres with a lipid bilayer that mimics the membranes of living cells. They deposited these droplets in layers to create a material that can bend like muscle or communicate like neurons, as reported today (April 4) in the journal Science.

"We've made a new kind of material. Not just a new material, but really a whole class of materials," said study co-author Gabriel Villar, a chemist at the University of Oxford, in England. In principle, these materials could be used to mimic any kind of living tissue, Villar told LiveScience.

The material consists of tens of thousands of water droplets separated by a thin membrane called a lipid bilayer, the same membrane that encapsulates living cells and keeps everything from spilling out. These bilayers consist of an oily, water-resistant layer sandwiched between two water-friendly layers.

Previous experiments have assembled droplets into lipid bilayers, but the droplets were either made by hand, or were made using techniques that couldn't control the movement of individual droplets.

Villar and colleagues have developed a 3D printer that could produce these droplets automatically. The printer uses a very thin glass nozzle to create droplets that are about 50 microns across (roughly half the width of a human hair). The printer squeezed the droplets into an oily solution that spontaneously coated each droplet in a lipid bilayer.

Next, the team showed how the printed material could be used to perform some of the functions of living tissue. For example, they printed a network of droplets that could transmit signals like tissues in the nervous system (albeit on a much simpler level). Neurons conduct electrical pulses along cell membranes by letting charged particles called ions pass through them. To mimic this, the researchers added a protein made by bacteria to some of the droplets, which cuts holes in lipid bilayers akin to a "cookie cutter," Villar said. An electrical current applied to the material passed through these holes much like a nerve impulse.

But the scientists didn't stop there. They used their printer to make self-folding structures, like flattened flower whose petals folded up.

The folding was a completely passive process that relied on the movement of water between droplets. The researchers added salt to some of the lipid-enclosed droplets, which created a salt gradient with nearby droplets. Water naturally moved from the droplets with no salt to those with salt, causing the salty droplets to swell. As a result, the flat petals curled up to form a hollow ball. The material was lifting itself against gravity, much like muscle tissue.

Ultimately, these 3D-printed materials could be used to deliver medicine or replace damaged tissue itself, the researchers said.

"This is an exciting new development in 3D printing using synthetic mimics of cells," said biomedical engineer Will Shu of Heriot-Watt University in the U.K., who was not involved in the study. "It is not hard to imagine this approach could be integrated for living organisms and the potential applications would be enormous."