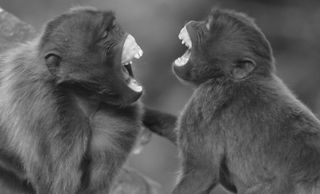 The ability to mimic the facial expressions of others is thought to be linked to empathy. It's known that humans and orangutans "ape" each other in this way, but gelada monkeys appear to do it too, a new study shows.

The phenomenon, known as rapid facial mimicry, is an unconscious response that occurs when two animals are interacting. Researchers showed that geladas (Theropithecus gelada), a type of Old World monkey, show facial mimicry during play — particularly mother-infant pairs. The curious ability may have a common evolutionary root among primates, the researchers say.

"This mimicry relates to an internal emotional connection," said neuroscientist Pier Francesco Ferrari of the University of Parma in Italy, who co-authored the study published March 28 in the journal Scientific Reports. It shows that "basic forms of empathy are present in other species that are not apes," Ferrari told LiveScience.

The researchers observed adult and baby geladas at a zoo in Germany during playful interactions. They recorded the play sessions on camera, noting whether the animals imitated each other's facial expressions. Facial expressions included the "play face," (an open mouth with only the lower teeth exposed), the "full play face" (lips pulled back to expose the upper and lower teeth and gums) and "lip-smacking" (lips smacked together, sometimes with the tongue extended).  The play faces are considered the equivalent of laughter in humans, whereas lip-smacking can have different meanings depending on the context. [Image Gallery: Cute Gelada Monkeys]

The geladas mimicked each other's play faces and the full play faces, but not the lip-smacking. Furthermore, mother-infant pairs engaged in the behavior most, and were also fastest at it. The findings show that the mimicking behavior seen in humans and apes has a counterpart in monkeys. In addition, the similarities between mother-baby interactions in these species suggest a common evolutionary origin.

Rapid facial mimicry is thought to arise from brain areas linking perception and actions. Scientists studying monkeys have found evidence of brain cells known as mirror neurons, which are active both when an animal performs an action and when it watches another animal doing it. In humans, this mirroring may be implicated in empathy, the researchers say.

Neuroscientist Marco Iacoboni of the medical school at UCLA said he found the study's results compelling. "We thought for many years that empathy is a human accomplishment, something we came up with that distinguishes us from other species," Iacoboni told LiveScience in an email. "Yet, the more we dig into the animal kingdom, the more we see evidence for empathy, or at least its evolutionary precursors and/or behavioral correlates, where we did not expect to find it."