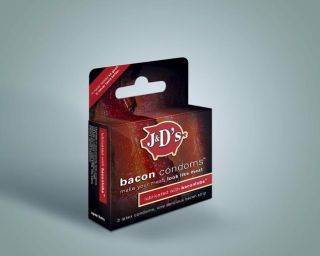 More than most other products, condoms seem to arouse people's creative ingenuity.

There are glow-in-the-dark condoms, Scotch whiskey-flavored McCondoms, dinosaur-shaped condoms and condoms printed with ruler measurements (presumably for men who feel they have something to prove).

And now, a bacon condom. It was only a matter of time.

J & D's Foods, whose corporate mission statement is, "Everything should taste like bacon," has announced its latest product, a condom that's patterned to look like a pinkish-red slab of bacon and is flavored with the company's Baconlube, according to the New York Daily News.

The company claims the condoms are "made in America of the highest-quality latex and rigorously tested to help ensure the utmost reliability and safety for when you're makin' bacon," Fox News reports.

Sexual health experts recommend condoms as a means of preventing unintended pregnancy and the spread of sexually transmitted infections. But a recent study revealed that many people don't use the prophylactics correctly, either removing them too early, storing them incorrectly or using no lubricant or the wrong kind of lubricant.

And though a 2011 study found that young, male college students with higher levels of testosterone were more likely to use condoms, the practice is not universally popular: Research from 2012 involving young, unmarried men and women revealed 25 percent considered using a condom every time during sex to be a "hassle."

Could the bacon condom change that? Perhaps.