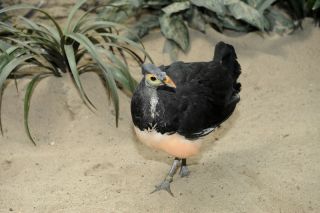 Three maleo chicks have been hatched at the Wildlife Conservation Society's (WCS) Bronx Zoo in New York, where keepers recreated the conditions of the birds' bizarre incubation.

While most birds sit on their eggs to keep their unhatched young warm, maleos bury their large eggs in underground nests, letting heat from geothermal sources, the sun or decaying vegetation do the work for them.

The chicks, when they finally hatch, are quite mature; on day one, they can dig themselves out from under 3 feet (1 meter) of earth, then start flying and foraging without any help from their parents.

For all their impressive features, wild maleos are in sharp decline in their native home on the Indonesian island of Sulawesi, which is why conservationists are trying to breed them in captivity.

Maleos at the Bronx Zoo are provided with deep river sand, which is heated electrically from below so that the birds can find a warm spot to bury their eggs. Surveillance cameras allow keepers to watch the nesting areas closely so that when an egg is laid, it can be dug out of the sand immediately and moved to an incubation room, where it hatches after about 70 days. The three maleo babies that have just hatched are healthy and being kept in an off-exhibit area of the zoo, WCS officials said.

Maleos are mostly black in color, with peach plumage on their stomach, yellow facial skin, a red-orange beak and a casque on top of their head. The birds, which belong to the megapode family, are listed as endangered by the International Union for Conservation of Nature. In Sulawesi, the birds' wild population is shrinking due to humans' unsustainable harvesting of their eggs and predation by invasive species, according to WCS officials.

"Almost half of all megapode species are threatened with extinction," Nancy Clum, curator of ornithology at the Bronx Zoo, said in a statement. "The work we do with maleos both at the zoo and in the field can provide a model for conservation of other megapode species."