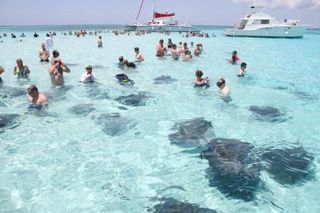 Tourists interact with Southern stingrays at Stingray City/Sandbar at the study site in the Cayman Islands.
(Image: © Guy Harvey)

Each year, nearly a million snorkel-masked tourists flock to Stingray City, a sandbar in the Cayman Islands, for a chance to touch, feed and even kiss wild stingrays. But all this interaction with humans seems to have softened the rays' rugged lifestyle, a new study suggests.

"We saw some very clear and very prominent behavioral changes, and were surprised by how these large animals had essentially become homebodies in a tiny area," study researcher Mahmood Shivji, of Nova Southeastern University's Oceanographic Center in Florida, said in a statement.

In the wild, stingrays are solitary stalkers in the night, traveling long distances to look for food and steering clear of other rays. But the creatures in Stingray City are getting used to food handouts and are changing their lifestyle accordingly.

Researchers tagged and monitored both wild and fed southern stingrays (Dasyatis americana) in the region over the course of two years. The team found that at least 164 stingrays were grouping together in less than a quarter square mile of space at Stingray City. The animals were even forming schools and feeding together during the day instead of looking for their meals alone at night.

It's not entirely clear why, but 80 percent of this group at Stingray City was female. It's possible that the skewed sex ratio could have something to do with the species' sexual dimorphism. Female southern stingrays tend to be much larger than their mates and they might outcompete the males for food at Stingray City, the researchers said.

The rays in the tourist hotspot were also breeding and having babies year round with total disregard for their normal mating season. The researchers observed numerous bite marks on the fins of both male and female fed stingrays, suggesting that the animals in this population have become unusually aggressive toward each other as they compete for food from humans.

The researchers warn that the long-term changes on the animals' lifestyle could have a domino effect on the surrounding marine ecosystem, altering both stingray predator and prey dynamics.

"It's unclear how much of the stingray's daily diet comes from tourism-provided food, but the good news is we have seen the animals forage when tourists are absent suggesting that these animal are not completely dependent on these handouts," study researcher Guy Harvey, who initiated the project, said in a statement.

"Measuring that impact is important because there's a lot of interest in creating more of these interactive ecotourism operations, but we know little about the life histories of the animals involved or how they might change," Harvey added.

The research was detailed online this week in the journal PLOS ONE.