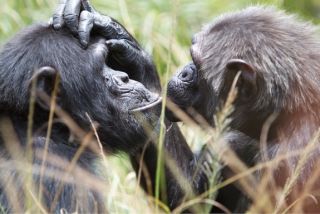 Brazen sex? If a female chimp is interested in a male, she'll put her swollen bottom right up in his face. An interested male may show off his erect penis to a female.
(Image: © Copyright: Daniel Haun)

Though chimpanzees and humans share about 99 percent of the same DNA, numerous physical and behavioral traits separate us from our closest living relatives. But are we different even when it comes to sex? Just how do chimpanzees "do it?"

Chimpanzees (Pan troglodytes) live in hierarchical communities of several dozen individuals. An alpha male sits at the top, females are at the bottom, and all other males rank linearly in between.

Like humans, chimpanzees have sex year-round. When a female is in heat, the skin around her genitals becomes pink and swollen — a clear sexual signal to males.

Both male and female chimps elicit sex, though in a more brazen way than most people. If a female's interested in a male, she'll put her swollen bottom right up in his face. When a male wants sex, he shakes a tree branch or displays his erect penis to a female.

While men often prize youthful partners, male chimps prefer older females. These experienced females have the most sex, but most females do mate with several males in the community, and sometimes with males in other communities.

Subordinate males often like to mate in secret, out of the alpha male's sight. If an alpha male catches a coital couple, he may execute a "bluff display," where he charges at the pair, Darby Proctor, a primatologist at Emory University, told LiveScience.

But his aggression is wasted. A few seconds after a male mounts a female from behind, the deed is already done.