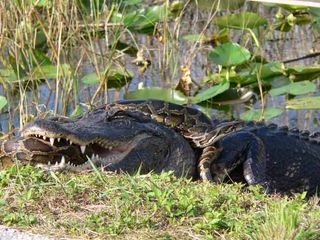 An American alligator and a Burmese python locked in battle in Everglades National Park. This python appears to be losing, but snakes in similar situations have apparently escaped unharmed, and in other situations pythons have eaten alligators, according to the U.S. Geological Survey.
(Image: © Lori Oberhofer, National Park Service)

Earlier this year, a U.S. Geological Survey report found that climate conditions favored the possible spread of Burmese pythons from Florida to as many as 32 states as the planet warms.

But a new study takes the opposite view: The voracious predators won't get out of the Everglades.

The foreign pythons were introduced to Florida by people who gave up their pets, scientists assume. A breeding population was discovered in the Everglades in 2003. Since then, populations have been found in many other locations, including other state parks, private land and even within municipalities. The powerful snakes, which squeeze life out of prey by constriction, can grow to 20 feet long and weigh more than 250 pounds.

Pythons have been known to devour dogs, consume cats and wrestle with alligators. One even tried, in a spectacularly unsuccessful event, to swallow a gator (the snake exploded).

"Wildlife managers are concerned that these snakes ... pose a danger to state- and federally listed threatened and endangered species as well as to humans," said Bob Reed, a USGS wildlife biologist at the Fort Collins Science Center in Colorado.

"Several endangered species have already been found in the snakes' stomachs," Reed said when the USGS report was released in February. "Pythons could have even more significant environmental and economic consequences if they were to spread from Florida to other states."

The USGS report was based, however, on just two climate factors: mean monthly rainfall and temperature.

"Although other factors such as type of food available and suitable shelter also play a role, Burmese pythons and other giant constrictor snakes have shown themselves to be highly adaptable to new environments," the USGS stated.

The new study, led by Frank Burbrink at the College of Staten Island/CUNY, used records on the distribution of pythons in their native range along with high-resolution global climate databases to predict the potential extent of the python's distribution in the United States and model the possible effects of global warming on the snakes.

"By using more complete climate data, in this case 19 variables measuring climatic extremes, averages and seasonal variation, we can make more accurate predictions of species distributions," said Alex Pyron, a graduate student at the City University of New York (CUNY). "Combining this climatic data with localities for the Burmese python allows us to create powerful models for predicting suitable habitat for the snakes."

The models, detailed Aug. 13 in the journal PLoS ONE, suggest that the pythons are restricted to the vicinity of the Everglades in extreme south Florida.

"The Burmese python is strongly limited to the small area of suitable environmental conditions in the United States it currently inhabits due to the ecological niche preferences of the snake," the researchers write. "Global warming is predicted to significantly reduce the area of suitable habitat worldwide, underscoring the potential negative effects of climate change for many species."

Reed, the USGS scientist, and his colleague Gordon Rodda, were both preparing to travel abroad this week and could not comment on the new study until having time to examine it thoroughly.