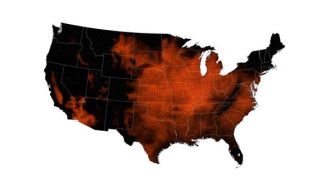 Extreme weather events have been on the rise in the last few decades, and man-made climate change may be causing them by interfering with global air-flow patterns, according to new research.

The Northern Hemisphere has taken a beating from extreme weather in recent years — the 2003 European heat wave, the 2010 Pakistan flood and the 2011 heat wave in the United States, for example. These events, in a general sense, are the result of the global movement of air.

Giant waves of air in the atmosphere normally even out the climate, by bringing warm air north from the tropics and cold air south from the Arctic. But a new study suggests these colossal waves have gotten stuck in place during extreme weather events.

"What we found is that during several recent extreme weather events these planetary waves almost freeze in their tracks for weeks," lead author Vladimir Petoukhov, of the Potsdam Institute for Climate Impact Research (PIK) in Germany, said in a statement. "So instead of bringing in cool air after having brought warm air in before, the heat just stays."

The researchers created equations to model the motion of the massive air waves, determining what it takes to make the waves plough to a stop and build up. The team then used these models to crunch daily weather data from the U.S. National Centers for Environmental Prediction.

During extreme weather events, the waves were indeed trapped and amplified, the scientists found. They also saw a significant increase in the occurrence of these trapped waves.

Here's how the waves may be getting trapped: The burning of fossil fuels causes more warming in the Arctic than in other latitudes, because the loss of snow and ice means heat gets absorbed by the darker ground, not reflected (as it would by the white snow). This warming lessens the temperature difference between the Arctic and northern latitudes like Europe. Since these differences drive air flow, a smaller difference means less air movement. Also, land areas warm and cool more easily than oceans. The result is an unnatural pattern of air flow that prevents the air waves from circulating over land.

The study's results help explain the spike in summer weather extremes. Previous research had shown a link between climate change and extreme weather, but did not identify the mechanism.

"This is quite a breakthrough, even though things are not at all simple — the suggested physical process increases the probability of weather extremes, but additional factors certainly play a role as well, including natural variability," study co-author Hans Joachim Schellnhuber, also of PIK, said in a statement.

The 32-year period studied provides a good explanation of past extreme weather events, the researchers say, but is too short to make predictions about how often such events may occur in the future.

The findings were reported online today (Feb. 25) in the journal Proceedings of the National Academy of Sciences.