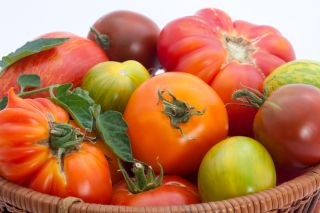 Mary Poppins was definitely onto something when she crooned, "Just a spoonful of sugar makes the medicine go down." Children and adults are evolutionarily ingrained to prefer sweeter foods to bitter ones, scientists have learned. But as it turns out, sugar isn't the only way to sweeten the pot. Researchers at the University of Florida in Gainesville are searching for new ways to make foods taste better naturally, without adding sugar or artificial sweeteners.

"Flavor equals health. If we can make healthy foods taste better, people will buy more of them and have a healthier diet," said Harry Klee, a University of Florida plant scientist. Klee and his colleague Linda Bartoshuk, a psychologist, have found that volatiles — chemicals in fruits and vegetables that create aromas — may play an even more important role than sugar content in a person's perception of sweetness.

Klee and Bartoshuk discussed their findings last week at the annual meeting of the American Association for the Advancement of Sciences in Boston.

"How sweet you think a fruit is isn't necessarily related to its sugars," Klee said. For instance, the researchers found that consumers rated one type of tomato, the Matina, as being twice as sweet as the Yellow Jelly Bean tomato, even though the Matina contained less sugar than its yellow relative.

Researchers have long known that volatiles existed in fruits and vegetables, but they didn't know how the different volatiles combined in the brain to create sweet flavor.

While studying tomatoes, Bartoshuk has found six volatiles that contribute to sweetness, independent of sugar. Oddly, not all the volatiles responsible for sweetness smell so sweet on their own. In fact, one volatile called isovaleric acid smells like dirty socks, Bartoshuk pointed out. Yet it combines with the input from other volatiles, as well as input from the taste buds, to create the perception of sweetness in the brain.

Bartoshuk and her colleagues have recently discovered more than 30 volatiles that create sweetness in strawberries in addition to the six that work together to sweeten  tomatoes.

No one knows exactly how volatiles create perceptions of sweetness in the brain. "It's possibly as simple as volatiles intensifying the effect of sugars in the brain," said Bartoshuk in an interview with My Health News Daily.

Not all volatiles contribute to sweetness, either. In fact, Bartoshuk believes that some may actually suppress sweetness. Identifying those volatiles is equally important, because it may allow food growers to create tastier varieties of foods such as tomatoes, by selecting the genes responsible for sweetness-inducing volatiles and eliminating genes that suppress sweetness.

Bartoshuk's future research will focus on how to add together the nearly 40 volatiles the University of Florida researchers have discovered in tomatoes and strawberries. Bartoshuk hopes to be able to combine the volatiles from the two fruits into a single mixture that could be added to foods and beverages to make them sweeter.

"The potential to create sweeter foods, while reducing the intake of sugars and artificial sweeteners is truly exciting. We believe it can be done," she said.

Pass it on: Smell, rather than taste, may influence our perception of a fruit's sweetness.