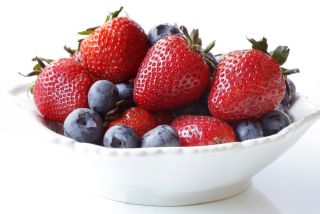 Women who eat more berries may have a lower risk of cognitive decline in old age, a new study suggests.

Researchers found that women who had a higher berry intake delayed cognitive aging by up to 2.5 years, as shown by their scores on memory and thinking tests.

Blueberries and strawberries, which have high levels of compounds called flavonoids, seemed to offer the greatest benefit, the researchers said.

"We provide the first epidemiologic evidence that berries may slow progression of cognitive decline in elderly women," said Elizabeth Devore, an instructor at Harvard Medical School in Boston. "Our findings have significant public health implications, as increasing berry intake is a fairly simple dietary modification to test cognition protection in older adults."

The study showed an association, not a cause-and-effect link, and more work is needed to confirm the findings.

Still, there are plausible ways to explain how berries protect cognitive function. Stress and inflammation may contribute to cognitive impairment, and flavonoids have antioxidant and anti-inflammatory properties, the researchers said. Increasing consumption of flavonoids could mitigate the harmful effects.

Previous research of flavonoids, particularly a group of compounds called anthocyanins, has been done with animals and very small trials in older persons, the researchers said. These studies have also suggested greater consumption of foods with these compounds improves cognitive function.

The researchers used data from 16,000 women taking part in the Nurses' Health Study, which began in 1976 and is conducted by researchers at Harvard Medical School and its affiliated hospitals. Participant completed health and lifestyle questionnaires, and between 1995 and 2001, researchers assessed their cognitive function every two years. Women included in the present study had a average age of 74.

Findings showed that increased consumption of blueberries and strawberries appear to slow cognitive decline in older women. A greater intake of anthocyanins and total flavonoids was also associated with reduce cognitive degeneration.

The authors caution that while they did control for other health factors in the modeling, they cannot rule out the possibility that the preserved cognition in those who eat more berries may be also influenced by other lifestyle choices, such as exercising more.

The findings are published Thursday (April 25) in the journal Annals of Neurology.

Pass it on: Eating more berries may be good for your brain.