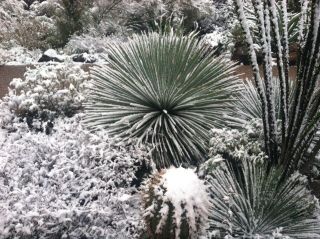 Fresh snow is a major event in a city where summer temperatures regularly soar above the sweltering level.

So even though the National Weather Service (NWS) officially reported only a trace desert snowfall in Tucson, Ariz., today (Feb. 20), residents still celebrated the powder (less than 0.1 inches, or 25 millimeters) clinging to palm trees and bougainvillea. The University of Arizona's Athletics Department already has a video online showing the campus under a flurry of flakes, set to cheery music.

There were some drawbacks: The opening round of the PGA Match Play golf tournament was canceled when rain turned to snow in Marana, Ariz. Several morning flights to Tucson's airport were diverted due to the wintry weather. And in the state's northern mountains, expected heavy snows led to public school closures in Flagstaff, including Northern Arizona University, according to the Associated Press.

The last time a measurable dusting of snow fell in Tucson, was two years ago, on Feb. 27, 2011, according to the National Weather Service's Tucson office. The city has had 71 days of measurable snowfall (more than 0.1 inches, or 25 mm) and 165 days of trace snowfall since record-keeping began in 1894.

"It's not unusual to have a storm system come through [in February] and produce snow," said NWS meteorologist Jeff Davis. "We've already had snow on the outskirts of the city this winter," Davis told OurAmazingPlanet.

"One aspect of the storm that was unusual was we had snow falling in the city around the noon hours. Typically, when we do get snow, it's either in the evening or overnight, or in the early morning hours when the snow levels drop," Davis said.

The higher elevation foothills surrounding Tucson could accumulate more snow, the NWS predicted. Two inches (5 centimeters) of snow covered the east side of Tucson, near Civano, the NWS reported. Yesterday (Feb. 19), the NWS was forecasting blizzard conditions and up to 3 inches (7 cm) of snow before the storm blew through.

The weather system moved in from California, where it pounded the Sacramento region with hail and spawned the state's first tornado of the year in Tehama County.

The storm will head into the Plains tomorrow (Feb. 21), the NWS said.