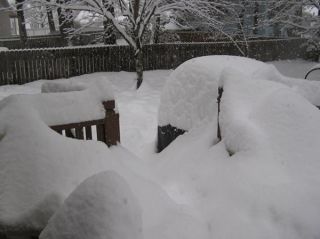 How thick is that snow?! The white stuff piled up during a December 2008 winter storm in Washington
(Image: © Courtesy of Kerry Jones, National Weather Service, Spokane WA.)

Although you may be accustomed to hearing your local meteorologist rattling off inches and other numbers in daily winter weather reports, finding out how much snow has accumulated on the ground is a tricky business, and one that still relies on some fairly primitive technology: essentially, a yardstick.

Yet determining precisely how much of the white stuff has piled up on the ground is key information for emergency planners, according to the National Science Foundation (NSF). Just look at Alaska's recent record-breaking snowfall for an example.

Officials rely on accurate snow measurements to plan for a host of issues: when to send out snow plows, assessing the threat of avalanches or floods, and anticipating the amount of water available from spring and summer runoff, to name a few.

To that end, the NSF is funding efforts to develop technologies that are able to quickly and accurately measure snow accumulation.

So what is the 21st-century answer to a yardstick? Lasers, of course.

Scientists at the National Center for Atmospheric Research (NCAR) in Boulder, Colo., have developed an instrument that uses laser pulses to measure 10 feet (3 meters) or more of snow with an accuracy as fine as a half inch (1.2 centimeters) or better. [Mobile Weather: Coming in 2012]

In a little more than an hour, the instrument measures snow at more than 1,000 points across an area almost the size of a football field to produce a three-dimensional image of the snowpack and its depth.

The technology marks a big step forward, according to NCAR researcher Ethan Gutmann. "We've been measuring rain accurately for centuries, but snow is much harder because of the way it's affected by wind and sun and other factors," he said in a statement.

Gutmann's next step will be to build and test a laser instrument capable of taking more than 12,000 measurements per second that is able to measure snow over several square miles.

"If we're successful, these types of instruments will reveal a continually updated picture of snowacross an entire basin," he said.

However, there is one problem. The lasers can't penetrate buildings or other solid objects that might get in the way. Yet Gutmann envisions a time when laser instruments could be mounted on satellites and measure snowfall across the globe.

NCAR scientists are partnering with researchers at the National Oceanic and Atmospheric Administration and the University of Colorado Boulder in the quest to build better devices to measure snowfall.

Researchers say that in addition to lasers, GPS offers promise as a measuring tool.