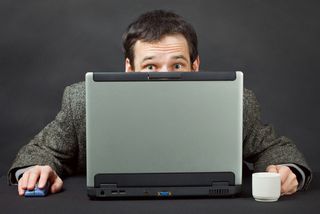 The rude comments that appear in online science news stories can actively shape perceptions of the science.
(Image: © pzAxe | Shutterstock.com)

When people read a science news story online, chances are they'll find a string of comments below, and the comments aren't always civil. But these comments actually influence people's perception of the science, a new study suggests.

The Internet provides a forum for discussing issues in a way that traditional media did not. "You used to use media by yourself. Now, it's almost like reading the newspaper in middle of a busy street with people yelling in your ear what you should and shouldn’t believe," study co-author Dietram Scheufele, a communication scholar at the University of Wisconsin-Madison, told LiveScience.

Uncivil commenters (knowninformally as "trolls") dominate online discussions with comments such as: "Wonder how much taxpayer cash went into this 'deep' study?" and "This article is 100 percent propaganda crapola." Such digital rants and diatribes are a staple of today's media environment.

Scheufele and colleagues studied how online incivility affects readers' perceptions of a scientific issue — specifically, nanotechnology. They found that impolite comments on a blog post about the science skewed people's views of the technology's risks and benefits. The findings, presented Thursday (Feb. 14) at the annual meeting of the American Association for the Advancement of Science, will appear in an upcoming issue of the Journal of Computer Mediated Communication.

The researchers conducted an online survey of a nationally representative sample of 1,183 Americans. The participants read a neutral blog post from a Canadian newspaper that described risks and benefits of a particular use of nanotechnology, an interdisciplinary field of science dealing with things at the nanometer (one-billionth of a meter) scale. The researchers chose nanotechnology because it’s a topic on which most people haven't formed political opinions.

Participants saw different versions of the story — the blog post itself was the same, but each version contained either civil or uncivil comments. For example, an uncivil comment might be, "If you don't see the benefits of using nanotechnology in these products, you're an idiot." Civil comments made the same argument using polite language. After reading the blog post, the participants were asked to fill out a survey about the blog and comments, their views of the risks and benefits and other information.

The results showed that rude blog comments appear to make readers polarized about the risks of an issue — namely, nanotechnology — depending on how religious the reader is, as well as the individual's prior support for the issue.

Just as politicians bickering on television may push people to extreme positions, rude or disparaging blog comments can divide readers, according to the study's authors. The effect of online comments may be "especially troublesome" for science communicators, they write, particularly for contentious issues such as evolution or climate change.

"The whole idea of audiences debating science online is a good thing," Scheufele said. But he added, "We're looking at a town hall meeting without any established rules."