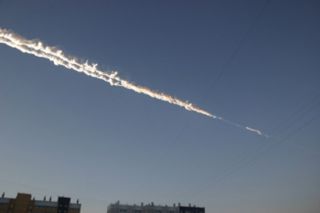 On Friday morning (Feb.15), residents of Russia's Chelyabinsk region were shocked by a giant fireball streaking across the sky. The explosion, caused by a small meteoroid entering the atmosphere, reportedly injured hundreds as it blew out windows and sent glass flying.

Dozens of videos of the meteor trail and its aftermath quickly appeared online, and analyses of these eyewitness accounts as well as measurements from scientific instruments are giving scientists one of the best looks ever at an atmospheric meteor burst.

Here are some frequently asked questions about the meteor event and what its known so far.

Calculations are preliminary, but NASA has found this is the largest meteor since the Tunguska event in 1908, which flattened hundreds of acres of remote forest in Siberia.

The meteoroid was about 50 feet (15 meters) across before it entered Earth's atmosphere, the space agency reported. That's significantly smaller than Tunguska, which was about 130 feet (40 m) in diameter. It's also about a third the size of 2012 DA14, an asteroid that made a close pass by Earth Friday afternoon, which is likely similar in size to the Tunguska object.

A 50-foot (15-m) diameter would make the Russian meteor larger than one that streaked over Indonesia on Oct. 8, 2009, NASA reported. [See Images of the Russian Meteor Explosion]

The arrival of the Russian meteor on the day of a close flyby by asteroid 2012 DA14 is just a weird cosmic coincidence. Videos of the Russian object show it traveling north to south, NASA has found. Asteroid DA14 is traveling south to north. The different trajectories reveal that the two space rocks are completely unrelated — other than reminding Earthlings that we live in a solar system full of flying shrapnel.

3. How often does this happen?

Large meteor explosions aren't a daily occurrence, especially over populated areas, but they do happen. Meteors of this size enter the atmosphere every few years to every decade or so, said Mark Boslough, a physicist at Sandia National Laboratories in New Mexico who studies impacts.

"It's like shooting craps," Boslough told LiveScience. "You can go a long time without rolling a seven, and then in a short period, you roll a few. That's just the way random events work."

4. Why do meteors explode?

Asteroids are just chunks of rock, so what makes them so explosive? In a word: speed.

The kinetic energy, or energy of motion, of a speeding asteroid is enormous. The Russian meteor entered the atmosphere going 40,000 miles per hour (64,374 km per hour), Bill Cooke, lead for the Meteoroid Environments Office at NASA’s Marshall Space Flight Center in Huntsville, Ala. said in a NASA press briefing.

The shock wave from an asteroid's interaction with the atmosphere heats up the rock, essentially vaporizing it, Boslough said. The hot vapor then rapidly expands in the atmosphere, with explosive results.

"It's just like TNT going off, only much more energy," Boslough said.

5. What's the difference between an asteroid, a meteorite and a meteor?

The terminology surrounding near-Earth objects can be confusing. Here's a primer: Asteroids are rocky objects in space, smaller than planets. They have no atmospheres, but do exert gravitational pull, sometimes orbiting one another.

Meteors are asteroids, comet fragments or other space objects that enter Earth's atmosphere or burn up. If you've seen a shooting star, you've seen a meteor.

Meteorites are meteors that make it all the way to Earth's surface. They're tough to find. The staff of the American Museum of Natural History in New York fields multiple emails a day from people wanting to know if an odd rock they've found originated in space. In more than 17 years, only one of these supposed meteorites has panned out, a planetary science staff member recently told LiveScience.

6. Can we see asteroids coming?

Russians weren't expecting explosions in the sky on Friday morning. But there's both good news and bad news about how much we know about dangerous space rocks.

The good news is that NASA researchers have calculated the paths of at least 90 percent of near-Earth asteroids more than 0.6 miles (1 km) across — the sort that could have a humanity-ending impact. [Top 10 Ways to Destroy Earth]

Smaller space rocks are more elusive, though. Astronomers have spotted only about 30 percent of asteroids 330 feet (100 m) wide that come near Earth during their orbits. Those asteroids could do a lot of damage if they entered Earth's atmosphere. And only about 1 percent of smaller rocks like 2012 DA14 are known.

At about 150 feet (45 m) wide, 2012 DA14 and its ilk are three times the size of the rock that shattered glass and injured hundreds in Russia on Friday. The Russia asteroid approached the Earth from the daytime sky, NASA's Cooke said. That made it invisible to telescopes, which can only search the night sky.

7. Will there be meteorites from the Chelyabinsk event?

It's so far unclear whether any space material made it to the ground after the meteor explosion over Russia. The Voice of Russia reported that as of midday, there had been no meteorites found. Russia Today, however, posted a photo and video to Twitter claiming to show a hole in icy Chebarkul Lake made by meteorite debris. So far, NASA has not confirmed any reports of debris from the explosion.