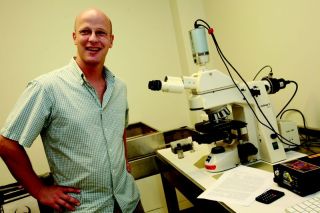 Oliver Kerscher evolved from the typical science-obsessed kid with pockets full of bugs and worms into a molecular biologist studying the chromosome cycle.
(Image: © Stephen Salpukas, College of William & Mary)

One of the great comeuppances for the human race was the realization that our DNA doesn’t differ very much from the DNA of other animals. Or plants. Even yeast.

The blow comparative genomics dealt to anthropocentrism and human vanity was a boon for medical science. Oliver Kerscher, a biologist at William & Mary, exploits the similarities between our DNA and the DNA of yeast to identify and study genes involved in genome maintenance and chromosome segregation.

“If I can understand the role of a certain gene in yeast,” Kerscher explains, “there’s a good chance that I can tell you the function of that gene in humans.”

Kerscher’s lab focuses on DNA damage brought out by hitches in the chromosome cycle, the process by which cells make copies of themselves. Botched genome maintenance during cell division is the root cause of a number of human medical maladies ranging from Down’s syndrome to spontaneous abortions to cancer.

By studying the chromosome cycle of yeast — the very same stuff you use to bake bread — Kerscher’s lab has been able to make important contributions to the understanding of genetic problems in humans.

There are many fascinating fields of biology, but when I began doing research in the early 90s molecular biology was just starting its heyday and biology turned from a descriptive science to one of deep molecular understanding. I was fascinated by the possibility to answer some of the ultimate questions about cell biology at very high resolution and so I sought out opportunities to get involved.

Someone once told me: “Always do what you like and success will follow.” Life science research is very hard and I cannot fathom how someone would study something they are actually not enthralled with. I see this a lot with students who have the tendency to join a program because of a hip lab or a hot story in science. This is why, in my mind, it is so important that students try out a few lab experiences and internships before they commit. I find that once a student has found what they like it’s impossible to keep them out of the lab and that’s when their research really takes off.

It sounds like a cliché, but I was one of those kids who always had worms and bugs in his pockets. When I was 6, I wanted to become a forest ranger and by 12 I had decided that my Ph.D. thesis was going to be on dragonfly maneuverability in flight. My first meaningful lab experience was during college when I interned for a summer in a molecular biology lab at Rockefeller University in New York. After that there was no turning back.

I have never dreaded going to lab, during the day, at night, weekends—it’s the whole experience for me. Of course I love “discovering,” but I accept experimental failure as a necessary part of research success. Nowadays, I enjoy work the most when I have a few particularly motivated students in lab who kick around models and experimental ideas. The social experience is definitely very important to me in research.

In the lab or field a researcher must be passionate and highly motivated about his/her field of study. However, when experiments don’t come out as expected, researchers must always be willing to abandon a model or modify a hypothesis. I find it is also very important that researchers strive to make their research findings available to the public. Taxpayers fund much of our research and should know what we study and why we do our experiments. In a way, researchers must now be comfortable with being scientists, public educators and advocates of science in policy.

Our research on cell cycle progression and genome maintenance in budding yeast informs the field of cancer biology. For example, in 2009 an undergraduate from our lab published our data that a new class of yeast enzymes was associating with double-stranded DNA breaks (DNA damage is often a starting point for cancer). Last year, researchers doing similar research in mammalian cells found out that the human equivalent of the yeast enzyme was doing the same thing. I like to believe that our research has a lot to do with some advances in human cancer biology.

In graduate school I had a very intense Ph.D. advisor who was a great teacher. I was passionate about the research, worked hard, and he taught me the ropes of how to do meaningful experiments with the powerful budding yeast models system. As a postdoc I worked with a brilliant scientists with a much more even temperament and I think that challenged me to take the time to look at my results from many different angles. In the end I try to pass on to my students a bit of what I have learned from all of my experiences, and so far that seemed to work because they do very well when they leave my lab.

One of my graduate students was once asked about our field of study. When he replied: "We study how cells divide!" the person questioning him said, "Cell division? Don't we already know how cells divide?" My student was quick in his reply and said: "If we did know everything about cell division, cancer would by now be curable!" I remember the stunned look on the face of the person questioning him. I think it is very surprising to folks how little we actually know about biology and how much basic research affects them.

It's a bit embarrassing, but I like what I call "intelligent electronic music" (Tiesto, etc.) My students have much more varied and interesting musical tastes and mostly I enjoy listening to what they play in lab.

Editor's Note: This research was supported by the National Science Foundation, the federal agency charged with funding basic research and education across all fields of science and engineering. Any opinions, findings, and conclusions or recommendations expressed in this material are those of the author and do not necessarily reflect the views of the National Science Foundation. See the ScienceLives archive.