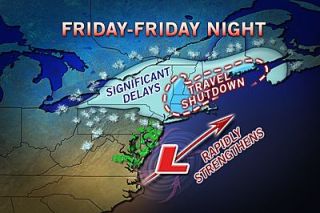 Just as there is the possibility of the storm strengthening rapidly to bring heavy snow to New York City, there is also the chance the storms stay separate long enough so that little precipitation falls. AccuWeather.com meteorologists are meeting the odds in the middle, projecting near 6 inches of snow in New York City, preceded by rain or a wintry mix during much of the day Friday.
(Image: © AccuWeather.com)

New York City and the northern mid-Atlantic are on the edge of a major storm that will hit New England as a blizzard Friday and Friday night.

Only if two storms, an Alberta Clipper from the west and a storm from the South, merge very quickly will there be more than a manageable amount of snow (a foot) in New York City, northern New Jersey, southwestern Connecticut, Long Island, northeastern Pennsylvania and upstate New York.

RELATED: Blizzard to Bury New England at the End of the Week Snow for Detroit, Buffalo, Wintry Mix for Chicago Safe Snow Driving

According to Winter Weather Expert Rob Miller, "While this is a possibility, it would be difficult for a storm to do this without a blocking area of high pressure to the northeast."

Such an area of high pressure would slow the forward speed of the storm down long enough to cause it to strengthen into an intense area of low pressure.

Warm air will be the issue in the New York City metropolitan area and Long Island causing part of the storm to be rain or a wintry mix. Odds favor wet roads around the city to a few slippery spots north and west for morning rush hour Friday. However, as more snow starts to mix in later in the day and a change to all snow likely by Friday evening, road conditions could rapidly deteriorate for the drive home Friday.

Low cloud ceilings and increasing winds during Friday may lead to building flight delays and cancellations even if snow were to stay away from the several major airports in the New York City area.

Farther south, the warm air may bring all or mostly rain to Philadelphia, Baltimore, Washington, D.C., southern New Jersey, the Delmarva Peninsula, much of the Maryland mainland and much of Virginia.

The southern part of the storm will drench the south with beneficial rain, but also urban flooding problems and locally strong thunderstorms Wednesday night into Friday.

Long Island is a unique spot as the area could be far enough to the east Friday night as to enter into the 2- to 4- inch per hour snow as the storm intensifies before pulling away. If the storm manages this for a few hours, there would be a foot of snow.

As far as coastal flooding is concerned, the strongest winds will be blowing offshore as the storm strengthens. There may be some problems along the north shore of Long Island, but the greatest risk of coastal flooding from the storm is along the east coast of New England (from Cape Cod to Boston).

In the central Appalachians, most areas will be south (and north) of the heavy precipitation, with a punch of dry air from the southwest being a factor, and warm enough for rain or a wintry mix for at least part of the event.

Across upstate New York and part of southern Ontario, moderate snow will fall from a substantial Alberta Clipper cruising in from the Midwest Friday into Friday night.

For more information on the Alberta Clipper snow affecting the Midwest Thursday night and Friday, a new story has been published on AccuWeather.com.

Enough snow to shovel and plow is likely over much of this area which can reach as far south as parts of western and northern Pennsylvania into the higher elevations of West Virginia and western Maryland.

A brief shot of blustery, seasonably cold conditions are in store for Saturday in the wake of the storm. Temperatures will moderate Sunday, setting the stage for the next storm system Monday to bring mostly rain to the region with a wintry mix over northern upstate New York and northern New England.

Another winter weather event may follow later next week around Valentine's Day, but the exact nature of the storm and precipitation is complex. Details will follow as the time draws nearer.