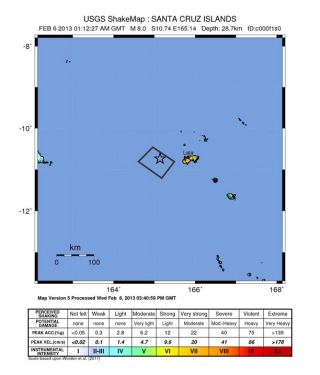 A map showing the intensity of shaking caused by a magnitude 8.0 earthquake in the Solomon Islands.
(Image: © U.S. Geological Survey)

The deadly earthquake and tsunami that hit the Solomon Islands today struck along a subduction zone, the same geologic setting responsible for the world's most powerful earthquakes.

In a subduction zone, two of Earth's tectonic plates meet and one slides beneath the other into the mantle, the deeper layer beneath the crust. The Solomon Islands sit above the collision between the Australia and Pacific plates. In the region of today's magnitude-8.0 earthquake, the Australia plates dives beneath the Pacific plate toward the east-northeast at a geologically speedy 3.7 inches (94 millimeters) per year, according to the Incorporated Research Institutions for Seismology (IRIS).

The earthquake hit at a depth of 17.8 miles (28.7 kilometers) and was the second-largest earthquake in the Solomon Islands region in almost 40 years, IRIS said in a statement. Several aftershocks followed, the largest measured magnitude 6.6, according to the U.S. Geological Survey (USGS).

The tsunami generated by the quake, reported as 3 feet (0.9 meters) in height, hit villages on Santa Cruz Island, destroying structures and homes, according to news reports. A tsunami watch was issued for Australia, Indonesia and New Zealand, but not for the rest of the Pacific, according to the West Coast and Alaska Tsunami Warning Center.

Subduction zone quakes shove the seafloor in one sudden movement, which may generate a tsunami by pushing the ocean water above. However, depending on the depth and size of the earthquake, the actual seafloor surface may not move a significant amount, so a big earthquake doesn't always produce a massive wave.For example, a magnitude-7.6 subduction zone earthquake in the Philippines in August 2012, which started deep in Earth's crust, did not trigger a tsunami.

There were dozens of earthquakes around the Solomon Islands in the month leading up to today's massive quake, the USGS reported. More than 40 magnitude-4.5 quakes shook the islands in the past week alone, and seven of those temblors were larger than a magnitude-6.0, the USGS said.