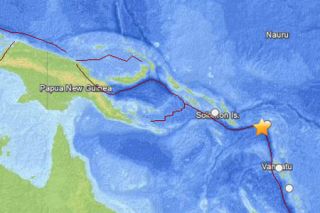 An earthquake of preliminary magnitude 6.7 struck today near the Solomon Islands in the South Pacific, according to the U.S. Geological Survey (USGS).

In the in the past 24 hours, several smaller quakes ranging from 4.6 to 6.0 in magnitude have struck the region, which lies on the Pacific Ring of Fire, a narrow zone around the Pacific Ocean where a large chunk of Earth's earthquakes and volcanic eruptions occur. No tsunami warning was issued.

Earthquakes of this size can cause significant damage, especially with poorly built structures. Even well designed buildings can be damaged or, in some cases, destroyed depending on the severity of the quake and a building’s proximity to the epicenter. But the damage caused by any single event depends on the quake's depth, proximity to populated areas, building standards in the region, as well as the type of earthquake. The USGS frequently updates the magnitude of an event after more data is analyzed.