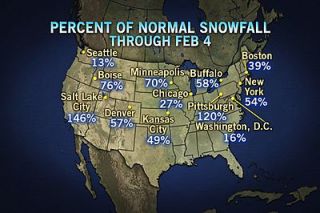 While the winter of 2012-2013 is well short of normal snowfall for many cities, there are some locations that are above the normal mark. There is still with more winter and snow to go.

Despite the abysmal snowfall numbers in some areas, many areas are ahead of least year in terms of snowfall.

Snowfall has and may continue to be lean along the I-95 corridor, in a pocket of the Midwest centered on Chicago and along the coastal areas of the Northwest.

In a typical winter, the I-95 zone does not receive a tremendous amount of snow, but it can achieve their average by way of one big storm. The same is true for a number of locations in the coastal Northwest, the Tennessee Valley and interior South.

Along the East coast, there has been a lack of cold storms tracking northward just offshore. In the coastal Northwest, there has been very limited arctic air around when frequent storms have visited the region.

As for the area from St. Louis to Chicago in the Midwest, most storms have been tracking to their west, east, north and south, leaving a doughnut hole in the middle.

There have been some locations that have done well for snow at this point in the season. These include many areas in the Appalachians, parts of the Great Basin and the interior South Central states.

The table below compares snowfall for this season so far to normal and all of last winter's (all in inches). In terms of snowfall, locations in white are above-average, locations in red are well below-average and locations in black are relatively close to normal. Amounts for the passes in the Cascades and Sierra Nevada are estimated and will not accurately reflect the season-to-date amounts until the end of the season. *(For these same passes, the normal snowfall for the entire season is used, instead through Feb. 3.)

Meteorologist Brian Edwards has a look at just how cold (or not) this January was.