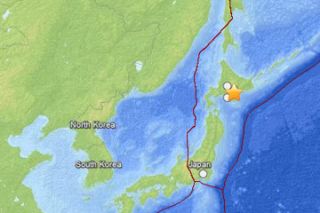 An earthquake of preliminary magnitude 6.9 struck the northern island of Hokkaido, Japan today, according to the U.S. Geological Survey (USGS). As of this writing, there were no reports of significant damage and no tsunami was expected.

The temblor's epicenter was 68 miles (109 km) from Kushiro and 525 miles (844 km) North-Northeast of Tokyo. It originated deep within the Earth’s crust, the USGS reports. Earlier reports had put the quake at magnitude 6.4. The USGS frequently updates the magnitude of an event after more data is analyzed.

A quake of this size is capable of causing considerable damage and are often followed by aftershocks. But the damage caused by any single event depends on the quake's depth, proximity to populated areas, building standards in the region, as well as the type of earthquake.

Today's earthquake originated 64 miles (103.1km) below the surface. The event occurred along what’s known as the Kuril-Kamchatka arc in the Pacific Rim, among the most volatile regions of the planet.