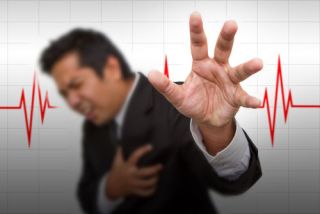 Single men and women are at higher risk of having heart attacks, research suggests.
(Image: © Michaelstockfoto/Shutterstock.com)

Unmarried men and women have a higher risk of having and dying from a heart attack regardless of age, a new study finds.

The study looked at a large population of people over the age of 35 in Finland from 1993 to 2002. The data came from the FINAMI myocardial infarction register, and included all fatal and nonfatal cardiac events, or acute cardiac syndromes (ACS).

A total of 15,330 cardiac events were recorded during the 10-year study, of which slightly more than half resulted in death within 28 days. The number of cardiac events was about equal for men and women.

The 28-day "case fatality rate" — the proportion of people diagnosed with a medical condition who die of that disease within a certain period of time — was 26 percent among 35- to 64-year-old married men, 42 percent among previously married men and 51 percent among never-married men. The same statistics for women were 20 percent, 32 percent and 43 percent, respectively. The case fatality rate for single 35- to 64-year-old men and women who lived alone was also higher than that for people living with at least one other person.

An array of factors might explain the finding that being unmarried is linked to greater heart attack risk, the researchers say. Married people may have better health habits, have more support and be better off financially than single people — all factors that help them maintain their health. Living with a partner also allows for quicker and more frequent medical intervention. Additionally, married patients may receive treatment sooner in a hospital, and be more likely to take prescribed preventative medications such as aspirin or beta-blockers.

On the other hand, the researchers haven't ruled out the possibility that people with poor health (and thus greater susceptibility to heart problems) may be more likely to be unmarried or divorced.

Previous studies have shown that being unmarried or living alone increases the risk of heart-related death and cardiovascular disease, but many have focused on men, and data on women and older age groups are missing or inconsistent. Unhappy marriages, on the other hand, can put strain on the heart — especially for women.

The new study was published today (Jan. 31) in the European Journal of Preventive Cardiology.