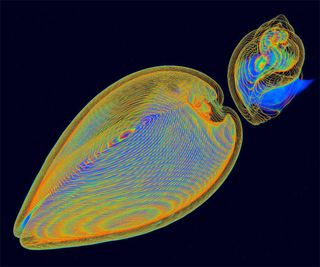 From a surrealist view of a sea urchin's tooth to a trippy clamshell, the world's most stunning science images of the year have been released.

The natural world is filled with gorgeous creatures, strange processes and mysterious structures hidden to the naked eye. The winners of the 2012 International Science and Engineering Visualization Challenge, announced today (Jan. 31), make that beauty visible in stunning imagery revealed in photographs, interactive videos, simulations and even computer games.

The winning illustration, a gorgeous depiction in blue, magenta and orange of the neural connections in a macaque monkey's brain, was an inspiration for IBM Almaden Research Center, where researchers wanted to create a brainlike neural network using computer chips. The stunning visual will be featured on the Feb. 1issue of the journal Science, which co-sponsors the competition along with the National Science Foundation.

This year's photography winner is a surrealist vision of a sea urchin's tooth. Using a scanning electron microscope, the winner, Pupa Gilbert of the University of Wisconsin, Madison, and her colleagues revealed the calcite crystals that form the sea-dweller's teeth. But unlike the hard planes of a normal crystal, the sea urchin's teeth are made of an intricate, interlocking web of dazzling blue, green and purple sections of the mineral. [See the Winning Visualization Images]

Another amazing depiction of a clamshell and whelk shell, taken by radiologist Kai-hung Fung at Pamela Youde Nethersole Eastern Hospital in Hong Kong, used a CT scanner to capture the self-defense tool in a trippy rainbow of colors. While the clam's shell is designed to snap shut rapidly to fend off a potential attacker, the whelk, which is also protected in a shelled fortress, can drill through the clam's shell to snag a juicy meal.

The contest, now in its 10th year, had 215 entries from eight countries. Judges rated the photos on how much impact, originality and effective communication the photos displayed. The public also weighed in for People's Choice Awards with 3,155 votes via social media.

"These winners continue to amaze me every year with their remarkable talent and drive to engage the public," said Monica M. Bradford, executive editor of the journal Science, in a statement. "The visuals are not only novel and captivating, but they also draw you into the complex field of science in a simple and understandable way."