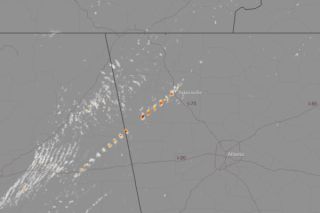 The signature of rotating winds associated with a tornado that struck Adairsville, Ga., on Jan. 30, 2013, are seen in this NEXRAD radar analysis.
(Image: © NOAA.)

A powerful tornado bore down on the town of Adairsville in northwest Georgia earlier today (Jan. 30), as part of a long line of severe weather stretching from Pittsburgh, Pa., to the Gulf Coast. The signature of the tornado's rotating winds can be seen in a newly released radar image.

The National Severe Storms Laboratory, run by the National Oceanic and Atmospheric Administration, did an experimental analysis of their NEXRAD radar, which showed "high rotational velocity" that was consistent with a tornado, according to a NOAA statement. The signature can be seen moving from Alabama across the border into Georgia, matching up with storms by the NOAA Storm Prediction Center.

Rotational signatures can show up on radar without the funnel cloud actually touching the ground, but in the case of Adairsville, it did.

The tornado overturned multiple cars on Interstate 75 and caused major structural damage, according to the Storm Prediction Center. One death was confirmed of a man in a mobile home. The death ended a streak of 220 days without a tornado fatality, the Weather Channel said.

National Weather Service teams will have to survey the damage before the strength of the tornado can be determined.

A tornado that hit Mt. Juliet, Tenn., in the early morning hours was confirmed to be an EF-2 on the tornado damage scale, with maximum winds of 115 mph (185 kph), according to the Nashville NWS office. Another EF-2 tornado was confirmed in Warren County, Ky. It was estimated to have had wind speeds of 120-125 mph (193 to 201 kph), according to the Louisville NWS. Two EF-0 tornadoes were also confirmed in Kentucky.

Tornado warnings have continued to pop up from the storm system, which is affecting much of the eastern United States, and is expected to continue to do so into the evening. Floods from torrential rains have also been reported across the region. The storms are expected to reach Washington, D.C., and New York City tonight.