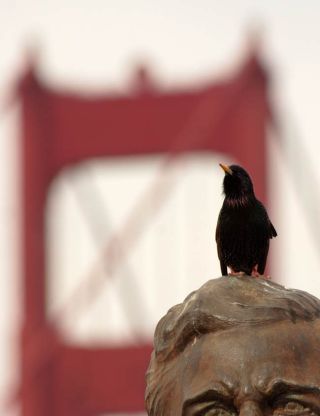 A male European starling sits on a statue and sings in San Francisco, with the Golden Gate Bridge in the background.
(Image: © Coen Elemans, University of Utah)

Some songbirds can contract their vocal muscles with the fastest muscle movements yet described — about 100 times faster than humans can blink an eye, according to new research.

The study found that two types of songbirds produce their tunes with superfast muscles, similar to those used by rattlesnakes, several fish and the ringdove (a type of pigeon).

"We discovered that the European starling (found throughout Eurasia and North America) and the zebra finch (found in Australia and Indonesia) control their songs with the fastest-contracting muscle type yet described," said Coen Elemans, who conducted the study as a postdoctoral researcher in biology at the University of Utah.

The birds change the position and stiffness of their vocal folds to alter the volume and frequency of the songs they sing.

"By having these extraordinary muscles, birds have a more precise control of their voice and can actively change the volume and frequency of their song faster than previously thought physically possible," Elemans said.

While the study only examined two species of songbirds, "it is very likely that all songbirds have these muscles," he said. The discovery of these types of muscles in new species, in addition to those animals already known to possess them, suggests superfast muscles, once thought extraordinary, are more common than previously believed, he added.

The researchers detailed their findings in the July 9 edition of the Public Library of Science's online journal PLoS ONE.