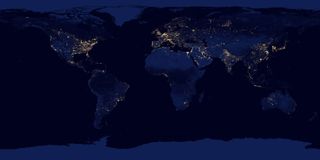 New research shows that major cities, which generally correspond with the nighttime lights in this image, can have a far-reaching impact on temperatures.
(Image: © NOAA and NASA)

The heat released by everyday activities in energy-guzzling cities is changing the weather in far-away places, scientists report today (Jan. 27).

The released heat is changing temperatures in areas more than 1,000 miles away (1609 kilometers). It is warming parts of North America by about 1 degree Fahrenheit (0.6 degrees Celsius) and northern Asia by as much as 1.8 degrees Fahrenheit (1 degree Celsius), while cooling areas of Europe by a similar amount, scientists report in the journal Nature Climate Change.

The released heat (dubbed waste heat), it seems, is changing atmospheric circulation, including jet streams — powerful narrow currents of wind that blow from west to east and north to south in the upper atmosphere.

This impact on regional temperatures may explain a climate puzzle of sorts: why some areas are having warmer winters than predicted by climate models, the researchers said. In turn, the results suggest this phenomenon should be accounted for in models forecasting global warming.

"There's a tendency in climate science to overlook the effects of cities," Brian Stone, a professor of city and regional planning at Georgia Tech, told LiveScience. "Cities occupy just a few percent of the global land surface, but the amount of energy released as waste heat is contributing downwind to pretty significant changes in climate. I hope this will encourage us to focus more on cities as important drivers of climate change," added Stone, who was not involved in the current study. [8 Ways Global Warming Is Already Changing the World]

Hot in the city

Cities are known to be warmer than their surroundings due to what's known as the urban heat island effect — pavement, buildings and other building materials retain heat, preventing it from reradiating into the sky.

In the new study, the researchers looked at another kind of "urban heat," this one produced directly by transportation, heating and cooling units, and other energy-consuming activities.

"The burning of fossil fuel not only emits greenhouse gases, but also directly affects temperatures because of heat that escapes from sources like buildings and cars," said study researcher Aixue Hu, of the National Center for Atmospheric Research (NCAR), in a statement. "Although much of this waste heat is concentrated in large cities, it can change atmospheric patterns in a way that raises or lowers temperatures across considerable distances."

Hu and colleagues studied the energy effect using the National Center for Atmospheric Research (NCAR) model, a widely used climate model that takes into account the effects of greenhouse gases, topography, oceans, ice and global weather. The researchers ran the model with and without the input of human energy consumption, to see whether it could account for large-scale regional warming.

When man-made energy was included in the model, it led to winter and autumn temperature changes of up to 1.8 degrees F (1 degree C) in mid- and high-latitude parts of North America and Eurasia. The modeling is based on estimates, however, and more studies are needed to measure how much heat is actually released by urban areas.

Here's how the scientists think it works: Energy-hungry metropolitan areas are located on the east and west coasts of North America and Eurasia, beneath major "hot spots" of atmospheric circulation. The waste heat from these cities creates thermal mountains, or taller-than-normal columns of heated air, which cause air jets moving eastward to deflect northward and southward.

As a result, the jet stream in upper latitudes widens and strengthens, bringing up hot air from the south and causing warming far from the urban areas (and concurrent cooling in others).

"The energy consumption in highly populated areas can cause changes in wind patterns, and that causes climate change far away from the heating source," said meteorologist and study author Ming Cai of Florida State University.