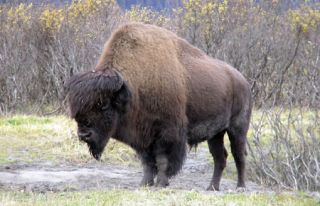 Wood bison bulls can weigh up to 2,000 pounds.
(Image: © Alaska Department of Fish and Game)

North America's largest land animal will roam the Alaskan wilderness once again if a plan unveiled last week is approved.

Wood bison, a subspecies of the more familiar plains bison, once lived throughout Alaska and much of western Canada but haven't been seen in the state's wilderness for more than a century due to hunting and other factors. That may be about to change: The U.S. Fish and Wildlife Service announced a plan Jan. 17 to reintroduce the beasts, according to the Alaska Dispatch, a news website.

Several groups have been trying to reintroduce wood bison for more than a decade. Some Alaskans have rejected the idea of introducing an animal listed under the Endangered Species Act for fear that this might interfere with gas and oil development, the Dispatch reported. (Habitats of endangered animals often cannot be used for certain commercial activities.)

Under the new plan, the Alaskan bison would be designated as a "nonessential experimental population" that isn't necessary to the survival of the species, which has rebounded enough in Canada to be considered threatened, as opposed to endangered as was the case previously.

If their population reaches a certain size, the animals would also be fair game for hunters, according to the plan. Alaska natives would get the first crack at them, but the Fish and Wildlife Service said that the plan is to eventually open the herd to the public, given certain constraints.

A public comment period on the plan has begun and ends in two months. Assuming that the plan goes through, which depends upon input from the public and wildlife experts, reintroduction could begin by next spring, Reuters reports.

A total of 132 animals already live in captivity at the Alaska Wildlife Conservation Center in Portage. Under the plan, they would be reintroduced to a grassland area near the lower Innoko and Yukon rivers, according to the Dispatch.

Wood bison are larger than their plains cousins, with adult bulls weighing up to 2,000 pounds (900 kilograms) or more, according to a statement from the U.S. Fish and Wildlife Service. In the early 1800s, there were as many as 168,000 throughout Canada and Alaska. Now there are 10,000 free-ranging wood bison in Canada, including about 4,500 in seven free-ranging, disease-free herds, the agency noted.

"Establishing wild populations of this magnificent animal in Alaska would be a significant step toward its eventual recovery and delisting" from the Endangered Species List, said regional director Geoffrey Haskett in the release.

Wood bison have already been introduced to Russia, where scientists are trying to establish breeding populations of the animals, according to the Edmonton Journal. Wood bison are the closest living relatives to the steppe bison, which went extinct about 5,000 years ago.