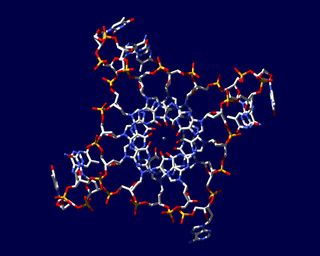 Image based on an x-ray crystal structure of a G-quadruplex formed from the DNA sequence found in human genomes.
(Image: © Jean-Paul Rodriguez)

The odd structures are called G-quadruplexes because they form in regions of deoxyribonucleic acid (DNA) that are full of guanine, one of the DNA molecule's four building blocks, with the others being adenine, cytosine, thymine. The structure comprises four guanines held together by a type of hydrogen bonding to form a sort of squarelike shape. (The DNA molecule is itself a double strand held together by these building blocks and wrapped together like a helix.)

The new visualization of the G-quadruplex is detailed this week in the journal Nature Chemistry.

"I think this paper is important in showing directly the existence of this structure in vivo in the human genome, but it is not completely unexpected," said Hans-Joachim Lipps, of the University of Witten in Germany, who was not involved in the study. [See Images of the 4-Stranded DNA]

Scientists had shown in the past that such quadruplex DNA could form in test tubes and had even been found in the cells of ciliated protozoa, or single-celled organisms with hairlike appendages. Also there were hints of its existence in human cells, though no direct proof, Lipps said.

But scientists still didn't have concrete evidence for its existence in the human genome. In the new study, researchers, including chemist Shankar Balasubramanian, of the University of Cambridge and Cambridge Research Institute, crafted antibody proteins specifically for this type of DNA. The proteins were marked with a fluorescent chemical, so when they hooked up to areas in the human genome packed with G-quadruplexes, they lit up.

Next, they incubated the antibodies with human cells in the lab, finding these structures tended to occur in genes of cells that were rapidly dividing, a telltale feature of cancer cells. They also found a spike in quadruplexes during the s-phase of the cell cycle, or the phase when DNA replicates just before the cell divides.

As such, the researchers think the four-stranded DNA could be a target for personalized medicine in the future. If they could block these odd ducks perhaps they could stop the rapid cell division of cancer cells.

"We are seeing links between trapping the quadruplexes with molecules and the ability to stop cells dividing, which is hugely exciting," Balasubramanian said in a statement.

The finding "is certainly a technical (not scientific) breakthrough in designing antibodies sensitive enough to demonstrate this structure in vivo in the human genome," Lipps wrote.

Lipps and his colleagues had suggested previously these structures regulate basic biological mechanisms, such as the replication of DNA.

"What makes me personally very happy about this work is that it again demonstrates that mechanisms first described in ciliated protozoa hold also true for other organisms up to human, demonstrating the strength of this model organism," wrote Lipps wrote.

The team still has several questions about quadruplexes, such as how the structures operate. "One thought is that these quadruplex structures might be a bit of a nuisance during DNA replication — like knots or tangles that form," Balasubramanian said.