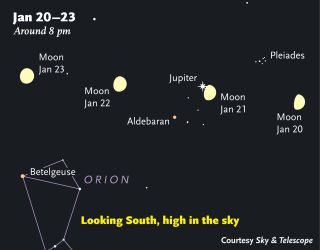 This sky map shows the location of Jupiter as it dances with the moon on the evening of Jan. 21, 2013. This diagram shows the appearance of the pair from Jan. 20 to Jan. 23rd, looking south, high in the evening sky.
(Image: © Sky and Telescope magazine)

Stargazers looking up as darkness falls on Monday (Jan. 21) will notice an eye catching pairing-off between two of the brightest objects in the nighttime sky, weather permitting.

The moon, appearing as a waxing gibbous phase, 78 percent illuminated, will appear to stand close below a very bright, non-twinkling, silvery "star." But it won't be a star that will be keeping the moon company on America's Inauguration Night, but the largest planet in our solar system: Jupiter.

Across much of the United States and southern Canada, this will be closest that the moon and Jupiter will appear relative to each other until the year 2026. On Monday night, the moon will be about of 248,700 miles (400,500 kilometers) from Earth, while Jupiter will be nearly 1,664 times farther out in space at a distance of 413.8 million miles (665.9 million km).

During Monday's stargazing event, observers have the chance to see what astronomers call an appulse — a very close approach of the moon to Jupiter. An appulse is a phenomenon caused by perspective only. There is no close physical approach in space between the two objects involved.  Astronomers insist that appulses have no direct effect on the Earth.

The moon, moving around the Earth in an easterly direction at roughly its own diameter each hour, will creep slowly toward and ultimately pass just below the giant planet. Jupiter, meanwhile, will be shining about three times brighter than the brightest star, Sirius, offering a commanding sight for stargazers despite its close proximity to the moon. [Amazing Stargazing Photos for January]

Although it will be the moon that will be moving in Jupiter's general direction, the illusion will be that it is Jupiter that is moving, appearing to glide slowly along on a path taking it above the moon. A similar illusion occurs during a lunar eclipsewhen the dark shadow of Earth appears to be slowly creeping across the face of the moon. In reality it is the moon itself slowly creeping into the Earth's shadow.

After their closest approach Monday, the moon will spend the balance of the night moving slowly away to the left (east), leaving Jupiter behind.

The table accompanying this guide gives local times of Jupiter's closest approach to the moon's upper edge on the night of Jan. 21 for 20 major cities across the United States and Canada. Separation is given in terms of a fraction of an angular degree. The width of the moon is equal to one-half (0.50) of a degree.

Examples: From Boston, closest approach between Jupiter and the moon is at 11 p.m. EST. Separation is 0.62 of a degree or one and a quarter times the apparent width of the moon from Jupiter to the moon’s upper edge. From Miami, closest approach is at 11:02 p.m. EST, the separation is listed as 0.33 of a degree or two-thirds of a moon's width separating Jupiter from the moon's upper edge.

From Halifax, Nova Scotia, an asterisk indicates that the closest approach between Jupiter and the moon comes after midnight on Tuesday (Jan. 22).

And here’s another interesting illusion: For many places in the United States and Canada, Jupiter will be separated from the moon's upper rim by at least a half-degree (0.50) — equal to the apparent width of the moon. And yet visually to the eye, Jupiter will appear to be much closer; in fact, seemingly impossible that the gap that separates Jupiter from the moon's edge would be large enough to accommodate an object that is equal to the size of the moon itself.  [How to Observe the Moon (Infographic)]

Even from places like Boston, Montreal and Edmonton where the gap exceeds a half degree, Jupiter will appear much closer relative to the moon’s edge. Check it out for yourself.

If you own a small telescope, there are several stargazing opportunities to get a close look at Jupiter during Monday night's appearance.

"You'll also get an opportunity to attempt an unusual feat: spotting Jupiter in the late afternoon, before the Sun sets," said Tony Flanders, associate editor at Sky & Telescope magazine and host of Skyweek on PBS, in a statement. "First locate the moon medium-high in the east; then look a few moon-widths left or lower left of the Moon for Jupiter. It should be easy to spot with binoculars if the air is clear."

Lastly, if you are lucky to be situated across a broad swath of central South America including French Polynesia, Pitcairn and Galapagos Islands an even more spectacular event will take place, when the moon will hide or eclipse Jupiter (called an occultation).

But don't fret if you miss the moon's occultation of Jupiter Monday night. Another one will occur on March 17, according to Sky and Telescope.

Editor's note: If you snap an amazing photo of Jupiter and the moon, or any other night sky view, that you'd like to share for a possible story or image gallery, send photos, comments and your name and location to managing editor Tariq Malik at spacephotos@space.com.

This story was provided by SPACE.com, a sister site to Live Science. Joe Rao serves as an instructor and guest lecturer at New York's Hayden Planetarium. He writes about astronomy for The New YorkTimes and other publications, and he is also an on-camera meteorologist for News 12 Westchester, New York.