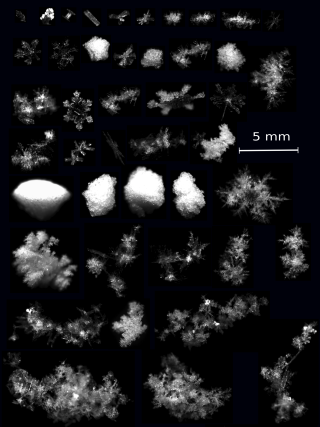 A gadget that can snap photos of individual snowflakes in freefall could lead to more accurate weather predictions.

Researchers at the University of Utah have developed the Multi Angle Snowflake Camera (MASC), which uses three high-speed cameras triggered by infrared sensors to shoot flakes as they float to the ground, with exposures as quick as 1/25000 of a second. The device also measures the flakes' fall speed, all without touching them, which would disturb the measurements.

The images could be used to better understand snowfall and create a more accurate model of winter storms. One of the things weather simulations are not currently good at is predicting snowfall accurately. "The reason they do so badly is because they don't represent snowflakes very well, because they are based on measurements of snowflakes that were done, painstakingly, by hand in the 1970s,” Garrett explained. “They were able to collect maybe a few thousand snowflakes. I knew the guy who did it and he felt he needed to get glasses because of this project."

In contrast, MASC can photograph and measure tens of thousands of snowflakes in a single night, Garrett said. Already, two MASC cameras in use at the Alta Ski Area are generating results that suggests wind and snow interact differently than weather models predict.

Garrett and Cale Fallgatter have formed a spin-off company to sell MASCs to interested parties. Fallgatter Technologies, officially spun-off six months ago, has already sold a camera to the U.S. Army, which is using it to improve avalanche prediction.

Besides being useful, the camera is also just plain fun to use. "It's very exciting to be able to look at the snowflakes every day as they're falling. I saw some fog up in the mountains, and wondered what kind of snowflakes this fog would produce," Garrett said.

Then he logged on to Alta's live feed and found out. While that day the snow was producing very regular, six-sided snowflakes, "the range is tremendous," he said. "When people say no two snowflakes are alike, that is very true. They are dissimilar in ways that I did not imagine prior to starting this project. The range of possibilities is immense."