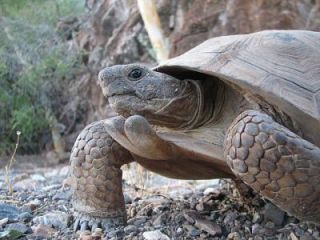 This is a Morafka's Desert Tortoise (Gopherus morafkai), from Tiburon Island, Sonora, Mexico. Little does it know it could hear better underwater.
(Image: © Taylor Edwards)

"If a desert tortoise decided to stick its head underwater, it could hear better," said Katie Willis, a University of Maryland doctoral student and co-author of a study published online this week in the journal PLoS ONE.

The findings shed light on the evolution of turtles, suggesting they all share an aquatic ancestor, the researchers said.

Willis and her co-authors took MRI and CT scans of the inner ears of many different species of turtles. They calculated that in every case these relatively large, air-filled sacks inside the skull resonated, or vibrated, more powerfully underwater, where sound waves travel more quickly than in air.

This process of hearing starts when sound waves vibrate the ear drum, which in turtles is flush with the outside of the skull, Willis told OurAmazingPlanet. When the sound waves are at the right frequency, or pitch, they cause the inner ear to resonate and vibrate, aiding hearing, she said. This allows animals to better hear fainter sounds.

After taking measurements of the turtles' inner ears, the team found that all of them closely resembled those of aquatic turtles; the ratio between the size of the skull and the size of the inner ear remained about the same, she said.

This observation, along with the team's resonance calculations, suggests that all turtles evolved from a common ancestor that lived in the water, she said.

"This strongly points to an aquatic origin for all turtles," Willis said. This has been a controversial topic, with some fossil evidence suggesting turtles have terrestrial origins.

She said the study should help better understand how hearing works in turtles and other animals, and where to place turtles in the evolutionary tree. It supports the hypothesis that turtles are more closely related to crocodiles and birds than to all other reptiles, contrary to previous theories.

Land turtles hear via sound vibrating their ear drums. Apparently it works well enough that evolution hasn't selected for a more specialized inner ear cavity, she said, a case of so-called neutral selection. Willis summed it up: "If it ain't broke, don’t fix it."