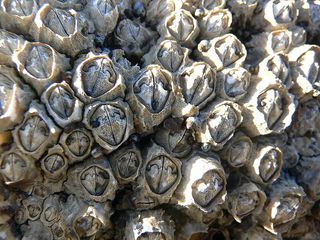 Barnacles use both an extremely long penis and broadcast sperm to mate with other barnacles
(Image: © mia.judkins | Flickr.com)

For barnacles, which are stuck in one place, sex can be tricky. The shelled sea creatures have been known to use extra-long penises to fertilize their nearest neighbors. Now researchers have discovered that when those neighbors are too far away, barnacles will "broadcast" their sperm and wind up with long-distance mates.

The discovery of sperm broadcasting "challenges the widely held belief that some form of copulation is obligatory when crustaceans mate," the researchers write in the Jan. 15 issue of the journal Proceedings of the Royal Society B.

Most barnacles are hermaphrodites that spend their adult lives glued to hard surfaces. To get around this mobility problem, barnacles, which are related to lobsters and crabs, will reproduce by practicing self-fertilization.

For the rare occurrence of sex, the barnacles will pseudo-copulate, or sprout extra-long penises to release sperm inside the shells of near-neighbors, impregnating them.

That, of course, is impossible for isolated barnacles.

Recently Marjan Barazandeh, a biologist at the University of Alberta, and colleagues noticed that one species of barnacle that lives in the Northeast Pacific, Pollicipes polymerus, had penises shorter than their legs; and the penis didn't seem to vary in length throughout the breeding season. They also noticed that some of the barnacles seemed to leak sperm into the water during low tide, leading the team to wonder whether the barnacles broadcast sperm as do other stationary creatures such as sponges and corals. [The Animal Sex Quiz]

To understand how the barnacles were getting their dose of genetic diversity, the team took a battery of measurements — including penis length, distance to near-neighbors, and fertilization status — from 599 barnacles off the British Columbian coast.

They found 37 isolated barnacles that, according to genetic tests, had been fertilized with foreign sperm. That suggested the barnacles were sending some sperm out into the oceans to be picked up by long-distance mates.

"P. polymerus is somewhat unusual: It has a relatively short and inextensible penis, and it lives in an extreme physical environment (wave-swept rocky shores), so sperm capture may be more likely in this species than in others," the authors write.

Still, the finding raises the possibility that other barnacle species with short penises broadcast sperm, they write.

As a follow-up, the authors said, they would like to understand exactly how this mating happens.