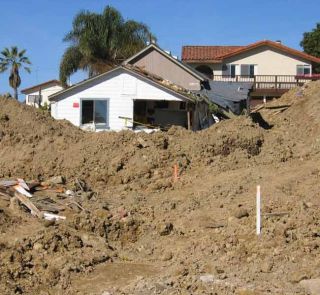 Researchers have identified characteristics that lead people to either overestimate or underestimate the risks of living in communities with known hazards such as landslides. This community in La Conchita, Calif., was damaged by landslides in January 2005.
(Image: © John Shea/FEMA)

The California wildfires in 2007 led some people to wonder why anyone would live in terrain as vulnerable to natural disasters as parts of California. Now, the heart of the 2008 fire season will soon be here and people will no doubt ask similar questions as homes and communities are threatened once again.

Do people have no choice but to live in a land that regularly suffers fires, landslides and earthquakes? Do they love the beauty and weather so much that they are willing to live with exceptional risks? Is it possible that they do not really understand the risks they face?

For decades scientists like Slovic, a psychology professor at the University of Oregon, Eugene, Ore. and president of the Decision Research group there, have studied aspects of these difficult questions.

For example, researchers have identified why some people tend to overestimate or underestimate the risks of certain hazards. Hazards that are familiar, visible, and well understood draw less concern than new, invisible, or less understood hazards.

Wildfire is a good illustration. In general, people are familiar with fire and understand a good deal about its mechanics, so fire risks are often underestimated or discounted. In contrast, the unfamiliar, invisible hazards posed by electromagnetic radiation tend to appear riskier and draw more concern and demands for government control.

"Understanding risks in a democratic society means understanding that there are multiple perspectives that should be considered when making risk decisions," says Slovic. "Risk decisions do not purely belong to scientists or government officials. The public has important contributions to make."

Slovic's perspective comes from his early days as a decision and risk behavior researcher in the late 1960's. It was then he met one of the early pioneers of decision, risk and management sciences, Dr. Gilbert White, who put him on the path to one of his most significant research findings.

White, who was studying risk decisions related to natural hazards — fire, hurricanes and the like — was aware of Slovic's work with risk and gambling experiments. White asked Slovic why people rebuild on the same spot after a natural hazard, a question Slovic could not answer. But it spurred him to further research.

That research resulted in the development of the psychometric paradigm of risk perception, a theory influential in convincing policymakers that experts are not necessarily better at estimating risks than lay people. By introducing a quantitative, survey-based method for studying risk perception, Slovic showed risk could be studied scientifically.

"The public is not ignorant or irrational when they disagree with the experts," says Slovic. "They may know things scientists do not know. It's important for us to bring public values into risk management decisions."

Taking cues from Slovic's research methodologies as well as from others', a number of scientists are examining the psychology of risk in order to help people make better decisions about risks. Much of this work is supported by the National Science Foundation, Arlington, Va.

For example, scientists are exploring questions about which risks people are or are not willing to take. An individual and his neighbor both may think the probability that a wildfire will damage their homes is exactly the same, yet one of them might move to a rainy climate to escape while the other would not dream of moving.

"We can't underestimate the importance of place, weather and beauty to people," says Slovic. "It's important that policymakers, government officials, and insurance companies take these risk elements into account.

"It may be that government officials want to restrict new development in a risky area, or that insurance companies want to ask people to share the cost burden."

Whatever happens, the 2008 fire season certainly will revisit the questions of previous years, giving rise to new suppositions and new theories about why people take obvious risks. Paul Slovic and other researchers will be there to weigh in.

To read more about some of Slovic's most recent work, check out Why Nations Fail to Act. For more to explore, visit the Web sites for some of the NSF-funded researchers whose work is described above: Paul Slovic, Ellen Peters, Howard Kunreuther, David Krantz.