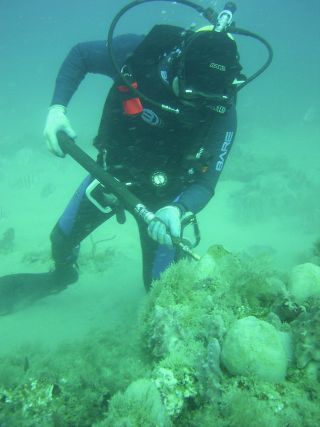 Scientists from UGA and the National Oceanic and Atmospheric Administration discovered and fully recovered a large fossilized whalebone near Gray's Reef National Marine Sanctuary approximately 20 miles off the Georgia coast in 2008.
(Image: © UGA)

Researchers diving off the coast of Georgia may have found the remains of an Atlantic gray whale, a relic of a population that was hunted to extinction by the 18th century.

But this particular specimen died long before whalers became a threat. Carbon dating showed that the fossil, a left jawbone, is about 36,000 years old.

The big bone was first discovered along with two badly eroded vertebrae near Gray's Reef National Marine Sanctuary about 20 miles (32 kilometers) off southeast Georgia in 2008. It took the researchers two years to pull out all of the pieces of the fossil, which was embedded in layers of shell and sand 70 feet (21 meters) below the surface. The jawbone was recovered in sections and measures 5 feet (1.5 m) in length.

The researchers say the bone is clearly from a baleen whale — or whales that use baleen plates in their mouths to filter meals of tiny organisms out of seawater — and looks very similar to that of the gray whale, Eschrichtius robustus. This species is only locally extinct. Gray whales can be found today in quite strong numbers, but only in the Pacific Ocean, and even these had once teetered on the brink of extinction during eras when the whaling industry reigned.

Scientists previously believed that the Atlantic gray whale had been a distinct species. But recent research has shown these vanished whales and the living ones in the Pacific are actually one in the same.

"The California grays looked exactly like the bones that were dug up in Scandinavia back in the 19th century," Ervan Garrison, a geoarchaeology professor at the University of Georgia, said in a statement, describing it as "one of the first instances where a living species was named based on the fossil evidence."

The new specimen's age of approximately 36,570 years old makes it one of the oldest fossil finds in the western Atlantic basin, the researchers say. And if the find indeed represents a Pleistocene-age gray whale, its oldest counterpart is a specimen found on the southern North Sea dating to 42,800 years ago.

The research was detailed online last month in the journal Paleontologica Electronica.